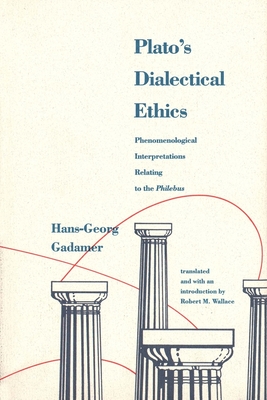 Phenomenological Interpretations Relating to the Philebus

Plato's Dialectical Ethics, Gadamer's earliest work, has now been translated into English for the first time. This classic book, published in 1931 and reprinted in 1967 and 1982, is still important today. It is one of the most extensive and imaginative interpretations of Plato's Philebus and an ideal introduction to Gadamer's thinking. It shows how his influential hermeneutics emerged from the application of his teacher Martin Heidegger's phenomenological method to classical texts and problems.
The work consists of two chapters. The first, which puts Socratic/Platonic dialectics and ethics in the context of Gadamer's thinking about how we come to shared understanding through conversation, helps to clarify the intentions and trajectory of all Gadamer's subsequent work.
The second chapter, on the Philebus, will interest everyone who is concerned with the connection between Plato's discussions of ethics and those of Aristotle, and with the substantive issues of the relation between pleasure and reason that Plato explores and Gadamer interprets. This edition includes a new and useful introduction by the translator, Robert M. Wallace.