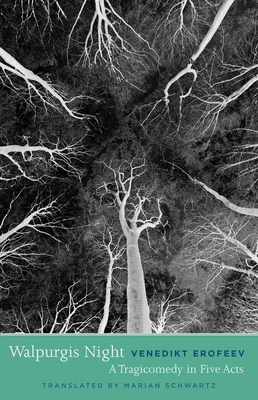 Walpurgis Night, or the Steps of the Commander (The Margellos World Republic of Letters)

Walpurgis Night, by acclaimed Russian writer Venedikt Erofeev, is considered a classic in the playwright’s homeland. Erofeev’s dark and funny five-act satire of Soviet repression has been called the comic high-water mark of the Brezhnev era. Walpurgis Night dramatizes the outrageous trials of Lev Isakovich Gurevich, an alcoholic half-Jewish dissident poet confined by the state to a hospital for the insane. In “Ward 3”—a microcosm of repressive Soviet society—Gurevich deploys his brilliant wit and ingenuity to bedevil his jailers, defend his fellow inmates, protest his incarceration, and generally create mayhem, which ultimately leads to a tragedy of Shakespearean proportions.


Praise For Walpurgis Night, or the Steps of the Commander (The Margellos World Republic of Letters)…

“Walpurgis Night is a burning drink of a play made from equal parts violence and comic relief . . . Schwartz’s translation is impeccable. Her attention to the brutality of Erofeev’s language, his comedic timing, and the sounds of words as they are spoken will likely make the work a classic outside of Russia.”—Ethan Alexander Perets, Words Without Borders
— Ethan Alexander Perets

Venedikt Erofeev (1938–1990) was prominent in the Russian postmodernism movement and a major literary figure in Soviet underground culture. His prose poem, Moscow to the End of the Line, has been translated into numerous languages. Marian Schwartz is a prizewinning translator of Russian fiction, history, biography, criticism, and fine art.
Loading...
or support indie stores by buying on