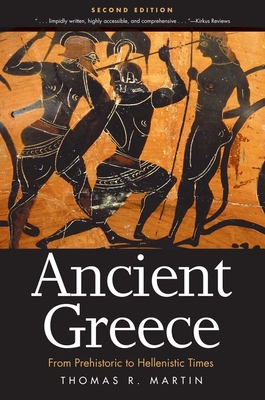 From Prehistoric to Hellenistic Times

In this compact yet comprehensive history of ancient Greece, Thomas R. Martin brings alive Greek civilization from its Stone Age roots to the fourth century B.C. Focusing on the development of the Greek city-state and the society, culture, and architecture of Athens in its Golden Age, Martin integrates political, military, social, and cultural history in a book that will appeal to students and general readers alike. Now in its second edition, this classic work now features new maps and illustrations, a new introduction, and updates throughout.
“A limpidly written, highly accessible, and comprehensive history of Greece and its civilizations from prehistory through the collapse of Alexander the Great’s empire. . . . A highly readable account of ancient Greece, particularly useful as an introductory or review text for the student or the general reader.”—Kirkus Reviews
“A polished and informative work that will be useful for general readers and students.”—Daniel Tompkins, Temple University

Thomas R. Martin is professor of Classics at the College of the Holy Cross. His publications include Herodotus and Sima Qian: The First Great Historians of Greece and China, Ancient Rome, and, as co-author, The Making of the West: Peoples and Cultures.

Praise For Ancient Greece: From Prehistoric to Hellenistic Times…

Praise for Ancient Greece, first edition: "In this survey of ancient Greek history and civilization, Martin skillfully blends social, cultural, political, and military data to create a panoramic view of the Greek world. Novices will find the work both comprehensible and entertaining."—Library Journal
"A limpidly written, highly accessible, and comprehensive history of Greece and its civilizations from prehistory through the collapse of Alexander the Great's empire. . . . A highly readable account of ancient Greece, particularly useful as an introductory or review text for the student or the general reader."—Kirkus Reviews
"This comprehensive coverage of ancient Greece begins with Stone Age prehistory and moves to coverage of Greek society and politics. It can easily appeal to any general reader with a cursory interest in Greek history, exploring how the people lived and developed their society."—Midwest Book Review
"Photographs and maps enhance this solid first lesson about the ancients."—Booklist
"This is a superb introduction to the Greek world for beginning students, precise and stimulating without overwhelming students with too many details."—David Graf, University of Miami