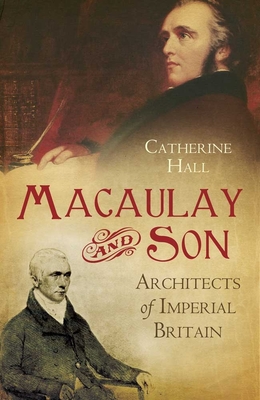 Thomas Babington Macaulay’s History of England was a phenomenal Victorian best-seller defining a nation’s sense of self, its triumphant rise to a powerfully homogenous nation built on a global empire and its claim to be the modern nation, marking the route to civilization for all others. In this book Catherine Hall explores the emotional, intellectual, and political roots of Zachary Macaulay, the leading abolitionist, and his son Thomas’s visions of race, nation, and empire. The contrasting moments of evangelical humanitarianism and liberal imperialism are read through the writings and careers of the two men.

Catherine Hall is professor of history at University College London. She is the author of the prize-winning Civilising Subjects: Metropole and Colony in the English Imagination 1830–1867.


Praise For Macaulay and Son: Architects of Imperial Britain…

“If Hall’s book inspires some readers to turn back to Macaulay’s essays and History of England, all the better.”—Jacob Heilbrunn, The Daily Beast
— Jacob Heilbrunn

“Catherine Hall’s insightful and compelling dual biography of Thomas Babington Macaulay and his father Zachary. . . is able to make the Macaulays illuminate many different historical themes and purposes. . .She confidently locates father and son within their intellectual and political milieu, emphasizing the importance of the Scottish Enlightenment and the stadial theory of human progress.”—David Arthur, Times Literary Supplement

"Catherine Hall tells the story of father and son with consummate skill. Not only is Macaulay and Son important for understanding imperial Britain, it is a beautifully crafted history. Rather than offering a strictly biographical study, Hall draws upon the two men's lives and writings in order to explore key themes.”—James Epestein, Victorian Studies
— James Epstein
or
Not Currently Available for Direct Purchase
Copyright © 2020 American Booksellers Association