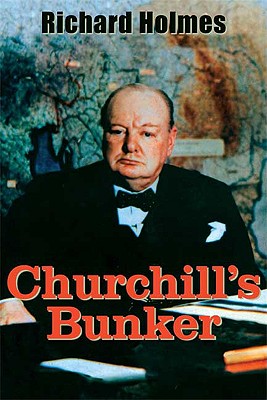 “This is the room from which I will direct the war,” Churchill declared upon seeing the dank storage basement in an improbably central location near the Houses of Parliament. The chambers would become his base of operations during the heaviest enemy bombardment of London. In Churchill’s Bunker, distinguished Churchill biographer Richard Holmes provides the first comprehensive history of the Cabinet War Rooms, from which Churchill managed to turn a seemingly inevitable defeat at the hands of the Nazis into a victory for the free world.

Here was the Map Room that charted the advances and retreats of armies, the locations of warships, and the often painful progress of the convoys that kept the nation supplied with munitions. Here the planners worked on future operations and the intelligence staff pondered the enemy’s next moves. And remarkably, all of this highly charged work was known only to those who needed to know.

Drawing on a wealth of original material, including new firsthand accounts of the people who lived and worked there, Holmes reveals how and why the bunker and its war machine developed, how life was conducted in a realm where “only the clock told whether it was night or day and . . . an electric bell gave warning of an air-raid,” and how Churchill interacted with his staff in very close quarters. A unique exploration of the calculus of secrecy during the Second World War, Churchill’s Bunker provides an intimate portrait of Churchill and his closest advisors in one of the most fascinating and underexplored venues of twentieth-century history.


Praise For Churchill's Bunker: The Cabinet War Rooms and the Culture of Secrecy in Wartime London…

“[This] book serves both as a guide to the fascinating Cabinet War Rooms and also as a fitting memorial to the men and women who worked so hard down there over six grueling years of war.”—Andrew Roberts, The Observer (London)

“Richard Holmes’s Churchill’s Bunker is a bright and fascinating new book devoted to where and how Churchill often lived and ruled during the first years of the war.  Bright, because it illuminates, literally, the underground warren of sunless rooms where Churchill’s staff functioned below blackened London streets. Fascinating, because both the origins and the conditions of this subterranean headquarters, as well as Churchill’s presence in and absence from it, were not at all simple.”—John Lukacs, author of Five Days in London: May 1940

“A fascinating and invaluable insight into the secret catacombs under Whitehall where Winston Churchill planned British war strategy, spoke to President Roosevelt through scrambler telephone, and broadcast his inspirational messages of defiance to Nazism.”—Andrew Roberts, author of Masters and Commanders: How Four Titans Won the War in the West, 1941-1945

“With this vivid and compelling combination of grand strategy and human detail Richard Holmes brings to life a very British and surprisingly effective war-time government, and the improvised bunker in which it operated.”—Lawrence Freedman, author of A Choice of Enemies: America Confronts the Middle East

Richard Holmes is one of Britain’s most distinguished historians. He is professor of military and security studies at Cranfield University and the Defence Academy of the United Kingdom, and he  was general editor of the Oxford Companion to Military History.
or
Not Currently Available for Direct Purchase