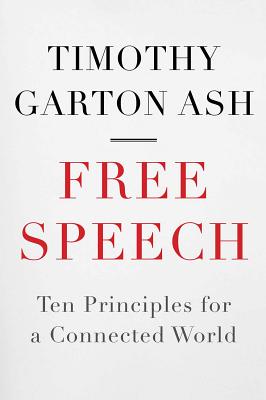 Named one of the Best Books of 2016 by The Economist

“Wise, up-to-the-minute and wide-ranging. . . . encourages us to take a breath, look hard at the facts, and see how well-tried liberal principles can be applied and defended in daunting new circumstances.“—Edmund Fawcett, New York Times Book Review

Never in human history was there such a chance for freedom of expression. If we have Internet access, any one of us can publish almost anything we like and potentially reach an audience of millions. Never was there a time when the evils of unlimited speech flowed so easily across frontiers: violent intimidation, gross violations of privacy, tidal waves of abuse. A pastor burns a Koran in Florida and UN officials die in Afghanistan.

Drawing on a lifetime of writing about dictatorships and dissidents, Timothy Garton Ash argues that in this connected world that he calls cosmopolis, the way to combine freedom and diversity is to have more but also better free speech. Across all cultural divides we must strive to agree on how we disagree. He draws on a thirteen-language global online project—freespeechdebate.com—conducted out of Oxford University and devoted to doing just that. With vivid examples, from his personal experience of China's Orwellian censorship apparatus to the controversy around Charlie Hebdo to a very English court case involving food writer Nigella Lawson, he proposes a framework for civilized conflict in a world where we are all becoming neighbors.


Praise For Free Speech: Ten Principles for a Connected World…

"Admirably clear, . . . wise, up-to-the-minute and wide-ranging. . . . Free Speech encourages us to take a breath, look hard at the facts, and see how well-tried liberal principles can be applied and defended in daunting new circumstances."—Edmund Fawcett, New York Times Book Review

"Particularly timely. . . . Garton Ash argues forcefully that . . . there is an increasing need for freer speech. . . . A powerful, comprehensive book."—Economist

"Timothy Garton Ash rises to the task of directing us how to live civilly in our connected diversity."—John Lloyd, Financial Times

"Illuminating and thought-provoking. . . . [Garton Ash’s] larger project is not merely to defend freedom of expression, but to promote civil, dispassionate discourse, within and across cultures, even about the most divisive and emotive subjects."—Faramerz Dabhoiwala, The Guardian

"A brave and admirable attempt to construct a platform on which more people can find common ground, even if only on how to disagree without killing each other.  Whether the ten principles are used or not, they are a considerable achievement."—George Brock, Times Literary Supplement

"A thorough and well-argued contribution to the quest for global free speech norms."—Kirkus Reviews

"Timothy Garton Ash’s new book Free Speech: Ten Principles for a Connected World is a rare thing: a worthwhile contribution to a debate without two developed sides. Ash does an excellent job laying out the theoretical and practical bases for the western liberal positions on free speech."—Malcolm Harris, New Republic

"A major piece of cultural analysis, sane, witty and urgently important. Timothy Garton Ash exemplifies the 'robust civility' he recommends as an antidote to the pervasive unhappiness, nervousness and incoherence around freedom of speech, rightly seeing the basic challenge as how we create a cultural and moral climate in which proper public argument is possible and human dignity affirmed."—Rowan Williams, Master of Magdalene College, Cambridge, and former Archbishop of Canterbury

"Timothy Garton Ash aspires to articulate norms that should govern freedom of communication in a transnational world. His work is original and inspiring. Free Speech is an unfailingly eloquent and learned book that delights as well as instructs."—Robert Post, Dean and Sol & Lillian Goldman Professor of Law, Yale Law School

"There are still countless people risking their lives to defend free speech and struggling to make lonely voices heard in corners around the world where voices are hard to hear. Let us hope that this book will bring confidence and hope to this world-as-city. I believe it will exert great influence."—Murong Xuecun, author of Leave Me Alone: A Novel of Chengdu

Timothy Garton Ash is Isaiah Berlin Professorial Fellow at St. Antony’s College, University of Oxford; Senior Fellow at the Hoover Institution, Stanford University; and a regular contributor to the New York Review of Books. He is the winner of the 2017 Charlemagne Prize and has won the Orwell Prize for Journalism.
Loading...
or
Not Currently Available for Direct Purchase