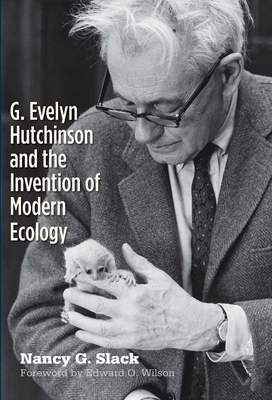 G. Evelyn Hutchinson and the Invention of Modern Ecology (Hardcover)

Stephen J. Gould declared G. Evelyn Hutchinson the most important ecologist of the twentieth century. E. O. Wilson pronounced him “one of the few scientists who could unabashedly be called a genius.” In this fascinating book, Nancy G. Slack presents for the first time the full life story of this brilliant scientist who was also a master teacher, a polymath, and a delightful friend and correspondent.

Based on full access to Hutchinson’s archives and extensive interviews with him and many who knew him, the author evaluates his important contributions to modern ecology and his profound influence as a mentor. Filled with information available nowhere else, the book draws a vibrant portrait of an original scientific thinker who was also a man of remarkable personal appeal.

Nancy G. Slack is professor of biology, emerita, The Sage Colleges. She lives in Scotia, NY.

Praise For G. Evelyn Hutchinson and the Invention of Modern Ecology…

“Nancy Slack’s fine study of Evelyn Hutchinson’s scientific achievements […] will be a highly significant book and a definitive study. [She] has very successfully integrated Hutchinson’s personal story with his work, providing a skillful analysis of a man at the heart of biology of the period. It [is] an outstanding analysis of Hutchinson’s work and impact on the international community.”—Janet Browne, author of Charles Darwin: A Biography and Darwin's Origin of Species: Books That Changed the World

"Timely...Slack has done a magnificent job."—Thomas Lovejoy, The H. John Heinz III Center for Science, Economics and the Environment

“A deeply researched, believable and compelling portrait of one of the most original, influential and interesting of twentieth century biologists. It is an important contribution to the history of science and scholarship, and will be read with great interest by scientists of all ages.”—Eric Mills, Professor of History of Science Emeritus, Dalhousie University

“In this meticulously researched biography, Nancy Slack has captured the many facets of G. Evelyn Hutchinson’s life and work. She reveals the passions of a polymath from science to literature to art, as well as the rich legacy of students and friends that Hutchinson left behind. Anyone interested in modern ecology and its origins should read the fascinating story of one of its chief architects.”— Frederick Rowe Davis, author of The Man Who Saved Sea Turtles: Archie Carr and the Origins of Conservation Biology

"The book faithfully lays out the many scientific advances achieved by Hutchinson, most of them during his inspirational teaching career…. [Slack] has the great virtue of allowing the reader to live for a brief time in Hutchinson’s company."—Benjamin Ivry, Times Higher Education
— Benjamin Ivry

"Hutchinson was the leading ecologist of the 1900s, and Slack has written a biography worthy of him. . . . An indispensible guide. . . . Slack writes equally well about his scientific and personal life in this well-illustrated and documented book."—F. N. Egerton, CHOICE
— F. N. Egerton

"...a rich trove of historical information that will serve as a springboard for future research and analysis of Hutchinson’s work and his impact on the development of ecology as a scientific discipline." —Aaron M. Ellison, Ecology
— Aaron M. Ellison

"Many more known or not-so-known aspects about Hutchinson's life have been collected and skilfully written down by Nancy Slack for her book G. Evelyn Hutchinson and the Invention of Modern Ecology." —Jonathan M. Jeschke
— Jonathan M Jeschke
or
Not Currently Available for Direct Purchase
Copyright © 2020 American Booksellers Association