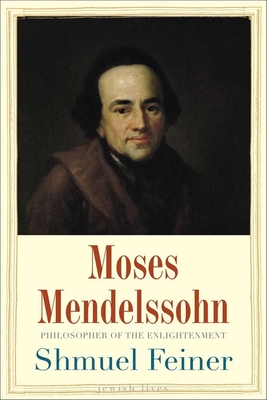 From the prizewinning Jewish Lives series, an accessible and fascinating biography of the seminal Jewish philosopher

The “German Socrates,” Moses Mendelssohn (1729–1786) was the most influential Jewish thinker of the eighteenth and nineteenth centuries. A Berlin celebrity and a major figure in the Enlightenment, revered by Immanuel Kant, Mendelssohn suffered the indignities common to Jews of his time while formulating the philosophical foundations of a modern Judaism suited for a new age. His most influential books included the groundbreaking Jerusalem and a translation of the Bible into German that paved the way for generations of Jews to master the language of the larger culture.

Feiner’s book is the first that offers a full, human portrait of this fascinating man—uncommonly modest, acutely aware of his task as an intellectual pioneer, shrewd, traditionally Jewish, yet thoroughly conversant with the world around him—providing a vivid sense of Mendelssohn’s daily life as well as of his philosophical endeavors. Feiner, a leading scholar of Jewish intellectual history, examines Mendelssohn as father and husband, as a friend (Mendelssohn’s long-standing friendship with the German dramatist Gotthold Ephraim Lessing was seen as a model for Jews and non-Jews worldwide), as a tireless advocate for his people, and as an equally indefatigable spokesman for the paramount importance of intellectual independence.

Shmuel Feiner is professor of Modern Jewish History at Bar Ilan University and holds the Samuel Braun Chair for the History of the Jews in Prussia. His books include Haskalah and History: The Emergence of a Modern Jewish Historical Consciousness and The Jewish Enlightenment (winner of the Koret Jewish Book Award).

"In extensive quotations from Mendelssohn’s many works, Feiner provides an introduction to Mendelssohn’s open, humanist thought and hopes, as well as his abiding fear that Jews would never attain full civil standing without sacrificing their religious tradition. Mendelssohn’s letters often reveal his disappointments and the burden he carried as spokesman for the Jewish community to both the governmental authorities and intellectual elite, defending Judaism even as he attempted to purge it of rabbinic authority and insularity. Feiner is particularly sensitive to Mendelssohn’s desire for a life of study, enriched by family and his salon of likeminded friends and thinkers, even as he was thrust time and again into the public arena."—Maron L. Waxman, Jewish Book Council
— Maron L. Waxman

"Feiner's Moses Mendelssohn serves as a useful introduction to this complex figure, and fills a longstanding need for a short, accessible biography . . . . Feiner is especially good at positioning the development of Mendelssohn's thought within the contours and challenges of his times."—Jerome Copulsky, Jewish Review of Books
— Jerome Copulsky

"A fascinating portrait of an important Enlightenment figure. . . . Feiner's biographical bildungsroman is a respectful and balanced treatment of the Socrates of Germany and the Father of Reform Judaism, appropriate for both academic and public libraries."—Brian Smith, Library Journal
— Brian Smith

"[R]eadable and lively . . . The volume offers an excellent introduction to Mendelssohn for students and interested lay readers as well as a welcome scholarly contribution."—Mara Benjamin, Religious Studies Review
— Mara Benjamin

"I came across Shmuel Feiner’s brilliantly readable little biography of the German-Jewish philosopher. . . . Biographers tend to get bogged down in detail, . . .  [but] something about the brief, interpretative format of the Yale series seems to have liberated Feiner. He tells us everything we need to know about Mendelssohn’s thought and brings the man to life, all in about 70,000 words. Each of which is precious."—Abigail Green, Jewish Book Council blog
— Jewish Book Council blog
or
Not Currently Available for Direct Purchase
Copyright © 2020 American Booksellers Association