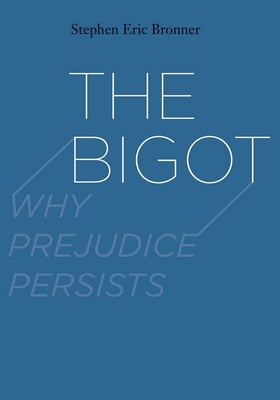 Stephen Eric Bronner is a prolific author, activist, and one of America’s leading political thinkers. His new book presents bigotry as a systematic, all-encompassing mindset that has a special affinity for right-wing movements. In what will surely prove a seminal study, Bronner explores its appeal, the self-image it justifies, the interests it serves, and its complex connection with modernity. He reveals how prejudice shapes the conspiratorial and paranoid worldview of the true believer, the elitist, and the chauvinist. In the process, it becomes apparent how the bigot hides behind mainstream conservative labels in order to support policies designed to disadvantage the targets of his contempt. Examining bigotry in its various dimensions—anthropological, historical, psychological, sociological, and political—Professor Bronner illustrates how the bigot’s intense hatred of “the other” is a direct reaction to social progress, liberal values, secularism, and an increasingly complex and diverse world. A sobering look at the bigot in the twenty-first century, this volume is essential for making sense of the dangers facing democracy now and in the future.

Stephen Eric Bronner is Distinguished Professor of Political Science at Rutgers University. He is also Director of Global Relations at its Center for the Study of Genocide and Human Rights and on the Executive Committee of UNESCO Chair in Genocide Prevention.

Praise For The Bigot: Why Prejudice Persists…

“An extremely important book. Bronner provides us with a multi-faceted and innovative theory of prejudice. But he also offers an astute analysis of the exclusionary practices that cavort under the cover of populism in America today. His book is a clarion call for renewed commitment to the progressive and cosmopolitan values that inform a just society.”—Dale Irvin, President, New York Theological Seminary
— Dale Irvin

"Stephen Eric Bronner’s The Bigot is a worldly, deeply learned, and passionately written reflection on bigotry through an analysis of the mental physiognomy of “the bigot.”  Its central claim is that bigotry is a product of modernity in revolt against itself, and that the only proper intellectual and political response to bigotry is a redoubled effort to realize modern Enlightenment ideals.  The book is both timely and important, and I highly recommend it."—Jeffrey C. Isaac, James H. Rudy Professor of Political Science at Indiana University, and Editor of Karl Marx and Friedrich Engels’s The Communist Manifesto (New Haven: Yale University Press, 2012) for Yale University’s Rethinking the Western Tradition series
— Jeffrey C. Isaac

"In the 21st century, genuflections to human rights and moral equality are so common that they obscure how strongly many deem those commitments to be threats to their most cherished privileges, practices, and beliefs. In "The Bigot," Stephen Bronner forcefully advances vital inquiries into the sources and substance of the politics of prejudice today."—Rogers M. Smith, Christopher H. Browne Distinguished Professor of Political Science, University of Pennsylvania
— Rogers M. Smith

Stephen Bronner has written a treatise that illuminates the episodes of mass paranoia that have marked our history.  In the process, we learn not only about the fears that drove Nazi mobs or the crowds that cheered at lynchings in the American South , but also about the paranoid frenzy of the contemporary right in the United States and Europe.   Read this book to understand the dark underside of our politics.- Frances Fox Piven, Distinguished Professor, Graduate Center of the City University of New York
— Frances Fox Piven

“An important new book that does not beat around the bush . . . . Refreshing in its brutal honesty and directness."—Adam Parker, Charleston Post and Courier
— Adam Parker

“An insightful, accessible and compact inquiry into why people hate other people.”—Shelf Awareness
— Shelf Awareness
or
Not Currently Available for Direct Purchase
Copyright © 2020 American Booksellers Association