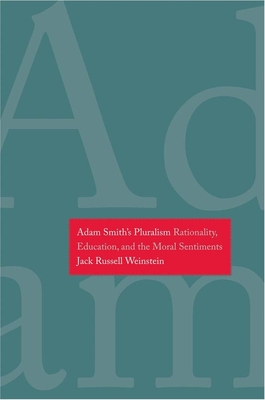 Rationality, Education, and the Moral Sentiments

In this thought-provoking study, Jack Russell Weinstein suggests the foundations of liberalism can be found in the writings of Adam Smith (1723–1790), a pioneer of modern economic theory and a major figure in the Scottish Enlightenment. While offering an interpretive methodology for approaching Smith’s two major works, The Theory of Moral Sentiments and The Wealth of Nations, Weinstein argues against the libertarian interpretation of Smith, emphasizing his philosophies of education and rationality. Weinstein also demonstrates that Smith should be recognized for a prescient theory of pluralism that prefigures current theories of cultural diversity.

Jack Russell Weinstein is Professor of Philosophy and Director of the Institute for Philosophy in Public Life at the University of North Dakota.

"By a patient and clear analysis of the explicit and implicit elements of Smith’s notion of the ‘impartial spectator’, including the persuasive, reasoned, educative and imaginative nature of the observational processes involved in moral and other judgments, JRW’s innovative inquiry has: repositioned the relationship between all of Smith’s major works; imaginatively challenged the ‘Adam Smith problem’;  emphasized Smith’s sustained educational concerns; and, by showing the ‘pluralism’ inherent in Smith’s work, restored Smith to the position of enduring moral philosopher through the specification of internal and consistent themes across  Smith’s works and by illustrating significant pre-figured conceptual links to modern notions of liberalism/pluralism."--Willie Henderson, Emeritus Professor, University of Birmingham UK, International Associate of the Alworth Institute, University of Minnesota Duluth.
— Willie Henderson
or
Not Currently Available for Direct Purchase
Copyright © 2020 American Booksellers Association