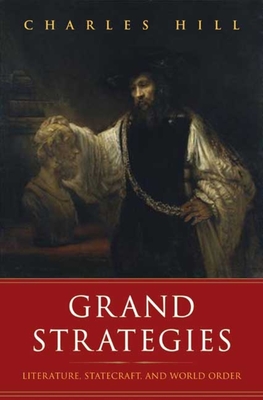 From “the man on whom nothing was lost,” a unique guide to the elements of statecraft, presented through spirited interpretations of classic literary works

“The international world of states and their modern system is a literary realm,” writes Charles Hill in this powerful work on the practice of international relations. “It is where the greatest issues of the human condition are played out.”

A distinguished lifelong diplomat and educator, Hill aims to revive the ancient tradition of statecraft as practiced by humane and broadly educated men and women. Through lucid and compelling discussions of classic literary works from Homer to Rushdie, Grand Strategies represents a merger of literature and international relations, inspired by the conviction that “a grand strategist . . . needs to be immersed in classic texts from Sun Tzu to Thucydides to George Kennan, to gain real-world experience through internships in the realms of statecraft, and to bring this learning and experience to bear on contemporary issues.”

This fascinating and engaging introduction to the basic concepts of the international order not only defines what it is to build a civil society through diplomacy, justice, and lawful governance but also describes how these ideas emerge from and reflect human nature.

Charles Hill, a career minister in the U.S. Foreign Service, is a research fellow at the Hoover Institution as well as Brady-Johnson Distinguished Fellow in Grand Strategy, Senior Lecturer in International Studies, and Senior Lecturer in Humanities at Yale University. He lives in New Haven, CT.

"A fascinating book that has the feel of a life's work. . . . Hill affirms the intellectual endeavor of looking at the world through a literary lens. . . . At a deeper level, the book is about the fragility of order and the struggle of statesmen to balance, restrain, and legitimate state power."--John Ikenberry, Foreign Affairs
— John Ikenberry

“Grand Strategies concerns statesmanship and strategy: the uses of power, the fate of alliances, war and peace. It also, happily, provides a tour through the Great Books, giving special attention to nation-states and their vexed relations.”--William Anthony Hay, Wall Street Journal

"A remarkable book. . . . Hill is the exemplification of the Clausewitzian coup d’oeil—the ability to see how everything connects to everything else."—John Gaddis, Yale University
— John Gaddis

"Charles Hill's Grand Strategies is a gem that combines long and valuable practical experience with the wisdom that comes from a broad and deep knowledge of history, literature and philosophy to produce a wisdom badly needed by statesmen and diplomats."—Donald Kagan, Yale University

"In an age of short attention spans and disaggregated facts, Charles Hill does much to revive two venerable traditions—the classical ideal of statesmanship, and the close engagement with great texts.”—Henry A. Kissinger
— Henry A. Kissinger

"Charles Hill's Grand Strategies transcends the tired categories of realism and idealism in the study of politics. Drawing from such as Aristotle and Homer, he spans centuries and circles the globe, always gazing from the standpoint of greatness. A sage and powerful book."—Harvey Mansfield, Harvard University

"The originality of this book lies . . . in the argument that these works have actually shaped the world of nations because of the influence they have on kings, princes, generals, and statesmen. . . . Grand Strategies is an unusual volume, filled with sharp insights about a daunting list of writers and circuitous pathways and detours that eventually lead the reader to hidden destinations. It makes its case diplomatically by drawing the reader into a way of thinking about the political world rather than by pressing a single argument or set of conclusions. It is as original as it is unusual, the rare volume that provokes neither agreement nor disagreement, but rather independent thought about the worlds we have lost and the one we have inherited."—James Piereson, The New Criterion
— James Piereson
or
Not Currently Available for Direct Purchase
Copyright © 2020 American Booksellers Association