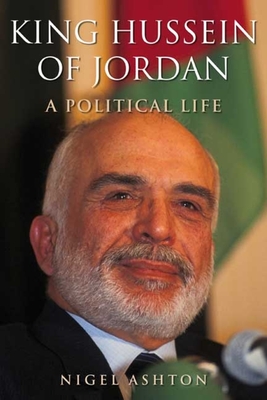 A towering figure in the history of Jordan, King Hussein reigned for nearly half a century, from his grandfather’s assassination in 1953 to his own death in 1999. In this fascinating biography, Nigel Ashton recounts the eventful life of the king who not only survived but flourished amidst crisis after crisis as ruler of a poor desert nation surrounded by powerful and hostile neighbors. Hussein skillfully navigated complicated relationships with the British, his fellow Arab leaders, the new bordering state of Israel, masses of dispossessed Palestinians within his kingdom, every U.S. president from Eisenhower to Clinton, and every British prime minister from Churchill to Blair. This book illuminates the private man, his key relationships, and his achievements and disappointments as a central player in the tough world of Middle Eastern politics.

Ashton has had unique access to King Hussein’s private papers, including his secret correspondence with U.S., British, and Israeli leaders, and he has also conducted numerous interviews with members of Hussein’s circle and immediate family. The resulting book brings new depth to our understanding of the popular and canny king while also providing new information about the wars of 1967 and 1973, President Reagan’s role in the Iran-Contra affair, the evolution of the Middle East peace process, and much more.

Nigel Ashton is senior lecturer, Department of International History, London School of Economics and Political Science, and author of Kennedy, Macmillan and the Cold War.

Praise For King Hussein of Jordan: A Political Life…

"In this respectful and measured scholarly evaluation, Ashton builds on unprecedented access to the late king's entire correspondence and more than two dozen interviews to lend valuable insight into how Hussein's shrewdness and empathy kept him politically (and literally) alive as well as casting light on many a foreign policy enigma. . . . Timely and relevant."—Publishers Weekly
— Publishers Weekly

"Ashton offers a great deal of material to flesh out Hussein's relations with world leaders, the Arab world and Israel, over more than 40 years. It's an elegantly written, engaging narrative. . . . His biography is a valuable contribution to understanding the background of the modern Middle East."—Gila Wertheimer, Chicago Jewish Star
— Gila Wertheimer

"A very lucid and careful work. . . . Ashton's crucial contribution—besides his innate fairness—is the sudden and unfettered access he gained to the hitherto closed Royal Hashemite Archives. . . . Ashton's new material fleshes out and finesses history rather than drastically altering it, but it lends Ashton's work a judicious precision and authority."—Colin Thubron, New York Review of Books
— Colin Thubron

'Ashton has provided Middle East watchers with a valuable quarry of material and insights into the life of a ruler who was dealt a weak political hand yet played it with remarkable skill.' — Alan Munro, Middle East International
— Alan Munro
or
Not Currently Available for Direct Purchase
Copyright © 2020 American Booksellers Association