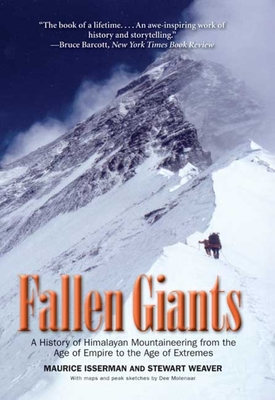 The first successful ascent of Mount Everest in 1953 by Sir Edmund Hillary and his Sherpa teammate Tenzing Norgay is a familiar saga, but less well known are the tales of many other adventurers who also came to test their skills and courage against the world’s highest and most dangerous mountains. In this lively and generously illustrated book, historians Maurice Isserman and Stewart Weaver present the first comprehensive history of Himalayan mountaineering in fifty years. They offer detailed, original accounts of the most significant climbs since the 1890s, and they compellingly evoke the social and cultural worlds that gave rise to those expeditions.

The book recounts the adventures of such figures as Martin Conway, who led the first authentic Himalayan climbing expedition in 1892; Fanny Bullock Workman, the pioneer explorer of the Karakoram range; George Mallory, the romantic martyr of Mount Everest fame; Charlie Houston, who led American expeditions to K2 in the 1930s and 1950s; Ang Tharkay, the legendary Sherpa, and many others. Throughout, the authors discuss the effects of political and social change on the world of mountaineering, and they offer a penetrating analysis of a culture that once emphasized teamwork and fellowship among climbers, but now has been eclipsed by a scramble for individual fame and glory.

Maurice Isserman is James L. Ferguson Professor of History, Hamilton College. He lives in Clinton, NY. Stewart Weaver is professor of history, University of Rochester. He lives in Rochester, NY. Both authors are enthusiastic hikers and mountain climbers.
Loading...
or support indie stores by buying on