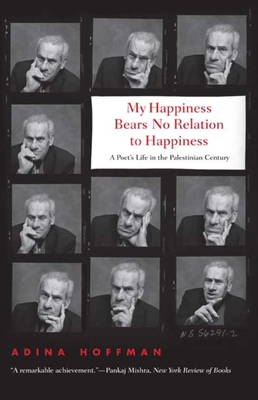 My Happiness Bears No Relation to Happiness

A Poet's Life in the Palestinian Century

“Adina Hoffman has been relentless in her efforts to research the life of Palestinian poet Taha Muhammad Ali, and she possesses a natural gift for storytelling. Her book describes the creation of a literary culture under the harshest circumstances. It is about the triumph of art and decency and memory against tremendous odds, and it breaks open a world about which I knew almost nothing. It's a terrific book, and readers will be drawn to its account of the triumph of the human spirit.”
— Karl Pohrt, Shaman Drum Bookshop, Ann Arbor, MI
View the List

Beautifully written, and composed with a novelist’s eye for detail,this booktells the story of an exceptional man and the culture from which he emerged.

Taha Muhammad Ali was born in 1931 in the Galilee village of Saffuriyya and was forced to flee during the war in 1948. He traveled on foot to Lebanon and returned a year later to find his village destroyed. An autodidact, he has since run a souvenir shop in Nazareth, at the same time evolving into what National Book Critics Circle Award–winner Eliot Weinberger has dubbed “perhaps the most accessible and delightful poet alive today.”

As it places Muhammad Ali’s life in the context of the lives of his predecessors and peers, My Happiness offers a sweeping depiction of a charged and fateful epoch. It is a work that Arabic scholar Michael Sells describes as “among the five ‘must read’ books on the Israel-Palestine tragedy.” In an era when talk of the “Clash of Civilizations” dominates, this biography offers something else entirely: a view of the people and culture of the Middle East that is rich, nuanced, and, above all else, deeply human.

Adina Hoffman is the author of House of Windows: Portraits from a Jerusalem Neighborhood. Her essays and criticism have appeared in the Nation, the Washington Post, the Times Literary Supplement, and other publications. She lives in Jerusalem.
Loading...
or
Not Currently Available for Direct Purchase