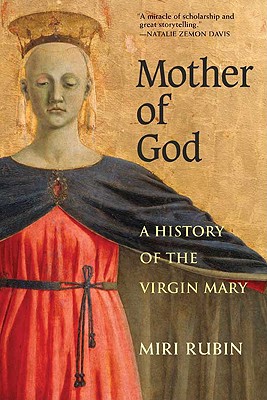 A History of the Virgin Mary

A sweeping, ambitious study of the Virgin Mary’s emergence and role throughout Western history

How did the Virgin Mary, about whom very little is said in the Gospels, become one of the most powerful and complex religious figures in the world? To arrive at the answers to this far-reaching question, one of our foremost medieval historians, Miri Rubin, investigates the ideas, practices, and images that have developed around the figure of Mary from the earliest decades of Christianity to around the year 1600. Drawing on an extraordinarily wide range of sources—including music, poetry, theology, art, scripture, and miracle tales—Rubin reveals how Mary became so embedded in our culture that it is impossible to conceive of Western history without her.

In her rise to global prominence, Mary was continually remade and reimagined by wave after wave of devotees. Rubin shows how early Christians endowed Mary with a fine ancestry; why in early medieval Europe her roles as mother, bride, and companion came to the fore; and how the focus later shifted to her humanity and unparalleled purity. She also explores how indigenous people in Central America, Africa, and Asia remade Mary and so fit her into their own cultures.

Beautifully written and finely illustrated, this book is a triumph of sympathy and intelligence. It demonstrates Mary’s endless capacity to inspire and her profound presence in Christian cultures and beyond.