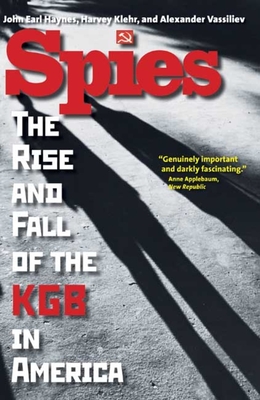 The Rise and Fall of the KGB in America

This stunning book, based on KGB archives that have never come to light before, provides the most complete account of Soviet espionage in America ever written. In 1993, former KGB officer Alexander Vassiliev was permitted unique access to Stalin-era records of Soviet intelligence operations against the United States. Years later, living in Britain, Vassiliev retrieved his extensive notebooks of transcribed documents from Moscow. With these notebooks John Earl Haynes and Harvey Klehr have meticulously constructed a new, sometimes shocking, historical account.

Along with general insights into espionage tactics and the motives of Americans who spied for Stalin, Spies resolves specific, long-seething controversies. The book confirms, among many other things, that Alger Hiss cooperated with Soviet intelligence over a long period of years, that journalist I. F. Stone worked on behalf of the KGB in the 1930s, and that Robert Oppenheimer was never recruited by Soviet intelligence. Spies also uncovers numerous American spies who were never even under suspicion and satisfyingly identifies the last unaccounted for American nuclear spies. Vassiliev tells the story of the notebooks and his own extraordinary life in a gripping introduction to the volume.

John Earl Haynes is a modern political historian in the Manuscript Division, the Library of Congress. He lives in Kensington, MD. Harvey Klehr is Andrew W. Mellon Professor of Politics and History, Emory University. He lives in Atlanta, GA. Haynes and Klehr are coauthors of Venona. Alexander Vassiliev, journalist, novelist, and coauthor with Allen Weinstein of The Haunted Wood: Soviet Espionage in America, now lives in the UK.
Loading...
or
Not Currently Available for Direct Purchase