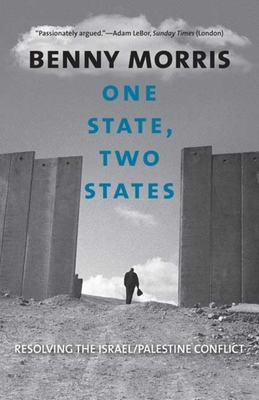 “What is so striking about Morris’s work as a historian is that it does not flatter anyone’s prejudices, least of all his own,” David Remnick remarked in a New Yorker article that coincided with the publication of Benny Morris’s 1948: A History of the First Arab-Israeli War. With the same commitment to objectivity that has consistently characterized his approach, Morris now turns his attention to the present-day legacy of the events of 1948 and the concrete options for the future of Palestine and Israel.

The book scrutinizes the history of the goals of the Palestinian national movement and the Zionist movement, then considers the various one- and two-state proposals made by different streams within the two movements. It also looks at the willingness or unwillingness of each movement to find an accommodation based on compromise. Morris assesses the viability and practicality of proposed solutions in the light of complicated and acrimonious realities. Throughout his groundbreaking career, Morris has reshaped understanding of the Israeli-Arab conflict. Here, once again, he arrives at a new way of thinking about the discord, injecting a ray of hope in a region where it is most sorely needed.

Benny Morris is professor of history, Middle East Studies Department, Ben-Gurion University, Israel. He has published many previous books as an author and editor, among them Righteous Victims: A History of the Zionist-Arab Conflict, 1881–2001; The Birth of the Palestinian Refugee Problem Revisited; and Making Israel. He lives in Israel.

Praise For One State, Two States: Resolving the Israel/Palestine Conflict…

“Morris is one of the most authoritative historians of the Israeli-Arab conflict. In his new book, he presents and up-to-date interpretation and suggestions for its solution.”—Walter Laqueur
— Walter Laqueur

"What is so striking about Morris's work as a historian is that it does not flatter anyone's prejudices, least of all his own."—David Remnick, New Yorker
— David Remnick

“I urge you, in the strongest terms, to read ‘One State, Two States.’ . . . I very much hope that it will ignite a freer, more honest, radically different conversation on the left, one informed by historical knowledge and current realities rather than the fantasies—alternately sentimental, infantile and grandiose—for which such a high price has been paid by all sides.”—Susie Linfield, TruthDig.com

"Morris details the various proposals for a "one-state" or "two-state" solution to the conflict that should have followed the UN General Assembly division of the territory and termination of the [British Mandate]. In a final chapter, he considers correctly that neither solution is practical or realistic. The best option, he feels, would be a West Bank-Gaza-Jordan confederation with Israel. . . . Recommended."—W. Spencer, Choice
— W. Spencer

"A rich and persuasive account of just how deep-seated and historically rooted the antagonism is between Israelis and Palestinians."--Ira Smolensky, Magill's Literary Annual 2010
— Ira Smolensky
or
Not Currently Available for Direct Purchase
Copyright © 2020 American Booksellers Association