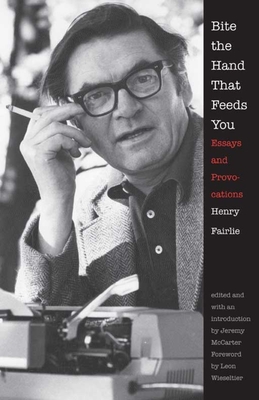 Bite the Hand That Feeds You (Paperback)

Henry Fairlie was one of the most colorful and trenchant journalists of the twentieth century. The British-born writer made his name on Fleet Street, where he coined the term “The Establishment,” sparred in print with the likes of Kenneth Tynan, and caroused with Kingsley Amis, among  many others. In America his writing found a home in the pages of the New Yorker and other top magazines and newspapers. When he died, he was remembered as “quite simply the best political journalist, writing in English, in the last fifty years.”

Remarkable for their prescience and relevance, Fairlie’s essays celebrate Winston Churchill, old-fashioned bathtubs, and American empire; they ridicule Republicans who think they are conservatives and yuppies who want to live forever. Fairlie is caustic, controversial, and unwavering—especially when attacking his employers. With an introduction by Jeremy McCarter, Bite the Hand That Feeds You restores a compelling voice that, among its many virtues, helps Americans appreciate their country anew.

Born in England, Henry Fairlie (1924–1990) was a frequent contributor to newspapers and magazines including the Washington Post and the New Republic. Jeremy McCarter is a senior writer at Newsweek. He lives in New York.
or support indie stores by buying on
Copyright © 2020 American Booksellers Association