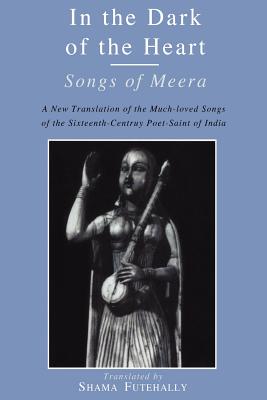 In the Dark of the Heart

Meera, they said, was mad. She is also the symbol Mahatma Gandhi chose to inspire his modern Indian renaissance and the archetypal female saint whose songs of love and devotion remain an integral part of Indian life and culture. Meera was a sixteenth-century Rajput princess who renounced her privileged life and royal family to live as a mendicant wandering, dancing, and singing the praises of God. A devotee of Krishna, she was part of an influential religious movement (bhakti) that rejected distinctions of caste and creed, stunned the stultifying rituals and inaccessible scripture of conservative religion, and believed that direct union with God was possible for all-men and women, highborn and lowborn. Mystical, celebratory, and frankly feminine, the songs of Meera embrace and evoke all of life-the ordinary, lowly, and humble; the natural world and all creatures; love and longing. They express a passionate faith that breaks down barriers, merging the human and the divine and challenging all notions of rank and hierarchy. Both poetry and prayer, these extraordinary songs reflect an all-encompassing spirituality and ardent devotion that remains part of the living folk tradition of India.

Shama Futehally was born in Bombay in 1952. She studied English at the universities of Bombay and Leeds, and taught English and Cultural History for eight years in Bombay and Ahmedabad. She moved to Delhi and spent most of the last few decades there. She was married to an IAS officer, and had two children. She published two anthologies of short stories, and her first novel, Tara Lane, won great critical acclaim. She had also written a collection of children's stories with Githa Hariharan, titled Sorry, Best Friend, and translated Urdu ghazals. Shama Futehally died on 3 Dec 2004.
Loading...
or support indie stores by buying on