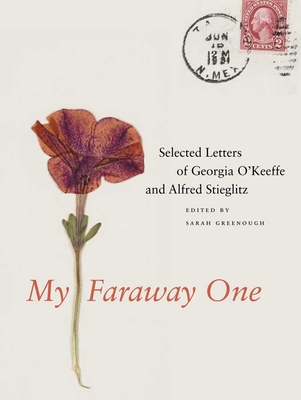 My Faraway One (Hardcover)

Selected Letters of Georgia O'Keeffe and Alfred Stieglitz: Volume One, 1915-1933

There are few couples in the history of 20th-century American art and culture more prominent than Georgia O'Keeffe (1887–1986) and Alfred Stieglitz (1864–1946). Between 1915, when they first began to write to each other, and 1946, when Stieglitz died, O'Keeffe and Stieglitz exchanged over 5,000 letters (more than 25,000 pages) that describe their daily lives in profoundly rich detail. This long-awaited volume features some 650 letters, carefully selected and annotated by leading photography scholar Sarah Greenough.

In O'Keeffe's sparse and vibrant style and Stieglitz's fervent and lyrical manner, the letters describe how they met and fell in love in the 1910s; how they carved out a life together in the 1920s; how their relationship nearly collapsed during the early years of the Depression; and how it was reconstructed in the late 1930s and early 1940s. At the same time, the correspondence reveals the creative evolution of their art and ideas; their friendships with many of the most influential figures in early American modernism (Charles Demuth, Arthur Dove, Marsden Hartley, John Marin, and Paul Strand, to name a few); and their relationships and conversations with an exceptionally wide range of key figures in American and European art and culture (including Duncan Phillips, Diego Rivera, D. H. Lawrence, Frank Lloyd Wright, and Marcel Duchamp). Furthermore, their often poignant prose reveals insights into the impact of larger cultural forces—World Wars I and II; the booming economy of the 1920s; and the Depression of the 1930s—on two articulate, creative individuals.

Sarah Greenough is senior curator and head of the department of photographs at the National Gallery of Art, Washington, D.C. She is the author of Alfred Stieglitz: The Key Set and many other critically acclaimed books on modern photography.

Praise For My Faraway One: Selected Letters of Georgia O'Keeffe and Alfred Stieglitz: Volume One, 1915-1933…