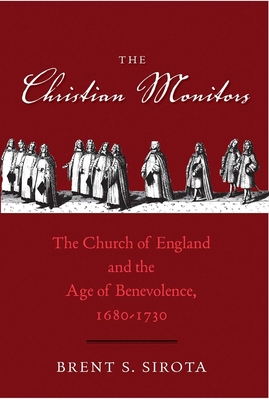 The Church of England and the Age of Benevolence, 1680-1730 (The Lewis Walpole Series in Eighteenth-Century Culture and History)

This original and persuasive book examines the moral and religious revival led by the Church of England before and after the Glorious Revolution, and shows how that revival laid the groundwork for a burgeoning civil society in Britain. After outlining the Church of England's key role in the increase of voluntary, charitable, and religious societies, Brent Sirota examines how these groups drove the modernization of Britain through such activities as settling immigrants throughout the empire, founding charity schools, distributing devotional literature, and evangelizing and educating merchants, seamen, and slaves throughout the British empire—all leading to what has been termed the “age of benevolence.”


Praise For The Christian Monitors: The Church of England and the Age of Benevolence, 1680-1730 (The Lewis Walpole Series in Eighteenth-Century Culture and History)…

“An excellent piece of scholarship, The Christian Monitors is a superbly researched, interesting and genuinely original account of the Church of England at a time of upheaval. Sirota's rich account of the institutional experiments in voluntary association is an important intervention in the intertwined historiographies of the public sphere, the age of projects, secularization and the Enlightenment.”—Rachel Weil, Cornell University

“The Christian Monitors is a particularly delightful read. It presents a complicated, sophisticated understanding of late seventeenth- and early eighteenth-century religious and political issues with exceptional clarity.”—Jon Butler, Yale University

“Sirota boldly reconceives the birth of civil society in Britain and makes good his claims with sophisticated argument, vivid detail, and humane sympathy for his subjects. ‘Church history’ has never looked so vital, vibrant or important as it does in this compelling and enjoyable book. This is a major contribution to the history of late Stuart and Georgian Britain.”—John Spurr, Swansea University

“Sirota’s book delivers a brilliant account of the nature of religious power and ambition in the Augustan age. This careful, deeply researched, and lucidly written book provides a significant story, delineating how the elite and provincial clergy adapted in different ways to the pluralist conditions of post-1689. The work brings a further perspective to the existing high calibre scholarship of Geoffrey Holmes, Gareth Bennett and Jonathan Clark.”—Justin Champion, University of London

“A lively text and it offers a new way to understand the evolution of religious expression – belief and practice – at the dawn of ‘modernity.’”—The Living Church
— The Living Church

“This razor-sharp debut merits wide and close attention. Its interventions should lead scholars to reconsider the role of religion in the tumults and transformations of Augustan Britain and rethink the great questions of modernization and secularization that continue to animate interest in the period—all with the Church of England at the center of their attention.”—The Journal of British Studies
— The Journal of British Studies

“If I were to recommend one academic book to specialists, graduate students, and advanced undergraduates about the formation of Anglicanism and the role that the church played in the development of British civil society in the eighteenth century, it would be this book.”—Gregory Dodds, History: Reviews of New Books
— Gregory Dodds

Brent Sirota is an assistant professor in the Department of History at North Carolina State University. He lives in Durham, NC.
Loading...
or support indie stores by buying on