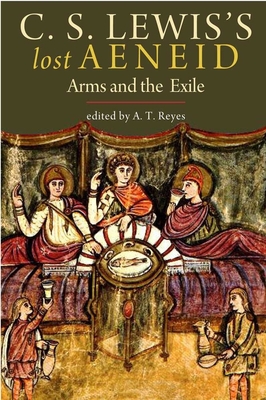 Arms and the Exile

C. S. Lewis (1898–1963) is best remembered as a literary critic, essayist, theologian, and novelist, and his famed tales The Chronicles of Narnia and The Screwtape Letters have been read by millions. Now, A. T. Reyes reveals a different side of this diverse man of letters: translator.

Reyes introduces the surviving fragments of Lewis's translation of Virgil's epic poem, which were rescued from a bonfire. They are presented in parallel with the Latin text, and are accompanied by synopses of missing sections, and an informative glossary, making them accessible to the general reader. Writes Lewis in A Preface to Paradise Lost, “Virgil uses something more subtle than mere length of time…. It is this which gives the reader of the Aeneid the sense of having lived through so much. No man who has read it with full perception remains an adolescent.” Lewis's admiration for the Aeneid, written in the 1st century BC and unfolding the adventures of Aeneas, a Trojan who traveled to Italy and became the ancestor of the Romans, is evident in his remarkably lyrical translation.

C. S. Lewis's Lost Aeneid is part detective story, as Reyes recounts the dramatic rescue of the fragments and his efforts to collect and organize them, and part illuminating look at a lesser-known and intriguing aspect of Lewis's work.

“It is thrilling to read Lewis' handling of the story of the legendary Trojan and his band of fugitives.”—Nick Owchar, Los Angeles Times
— Nick Owchar

“Lewis's literary endeavors include poetry, essays, novels, criticism, and translation. His take on Virgil's Aeneid, ‘his favourite of all books,’ serves to further enrich the legacy of this ambitious and prolific writer.”—Publishers Weekly (starred review)
— Publishers Weekly

“In this nimble rendition . . . C.S. Lewis has managed to achieve both fidelity and beauty . . . a cause for celebration in two worlds: Narnia and Ancient Rome.”—Jason Fisher, Mythprint
— Jason Fisher

“Even those readers who are new to the Aeneid will find this volume helpful . . . [and] Lewis fans should be delighted to discover yet another facet to the literary career of this ever diverse man of letters.”—Will Vaus, author of Mere Theology: A Guide to the Thought of C. S. Lewis
— Will Vaus

"[an] elegant work. . . . this volume offers unique insights on Virgil, the Aeneid, the epic tradition, the mind and work habits of Lewis, and the relationship between translation and art. Highly recommended."—D. Pesta
— D. Pesta

A. T. Reyes, who studied classics at Harvard and Oxford, helped Walter Hooper with the classical references in Lewis's Letters. He teaches Greek and Latin at Groton School, Massachusetts.
Loading...
or
Not Currently Available for Direct Purchase