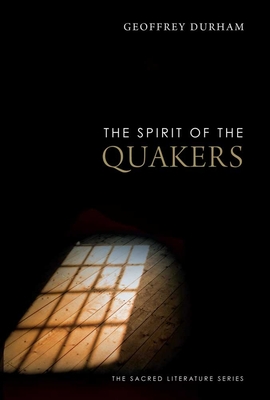 An inspiring and enlightening introduction to Quakerism, the second title in the Yale University Press “The Spirit of . . .”series

Who are the Quakers, what do they believe, and what do they practice? The Religious Society of Friends—also known as Quakers-—believes that everyone can have a direct experience of God. Quakers express this in a unique form of worship that inspires them to work for change in themselves and in the world. In The Spirit of the Quakers, Geoffrey Durham, himself a Friend, explains Quakerism through quotations from writings that cover 350 years, from the beginnings of the movement to the present day.

Peace and equality are major themes in the book, but readers will also find thought-provoking passages on the importance of action for social change, the primacy of truth, the value of simplicity, the need for a sense of community, and much more. The quoted texts convey a powerful religious impulse, courage in the face of persecution, the warmth of human relationships, and dedicated perseverance in promoting just causes.

The extended quotations have been carefully selected from well-known Quakers such as George Fox, William Penn, John Greenleaf Whittier, Elizabeth Fry and John Woolman, as well as many contemporary Friends. Together with Geoffrey Durham’s enlightening and sympathetic introductions to the texts, the extracts from these writers form an engaging, often moving guide to this accessible and open-hearted religious faith.

Geoffrey Durham became a member of the Religious Society of Friends in 1999. As a founding member of Quaker Quest, a pioneering outreach project, he has spoken or facilitated at some 300 public meetings, fielding questions and concerns from enquirers. He contributed articles to all seven of the “Twelve Quakers and . . .” series, and edited Twelve Quakers and Pacifism and Twelve Quakers and Equality. He lives in the UK.

"They [the Quakers] are fascinating. . . . Durham directs the reader to the movement's most articulate members. . . . The reader sees what goes on in Quaker meetings [and] how inspired members have contributed to social change in many areas."--Susan Salter Reynolds, Los Angeles Times
— Susan Salter Reynolds
or
Not Currently Available for Direct Purchase
Copyright © 2020 American Booksellers Association