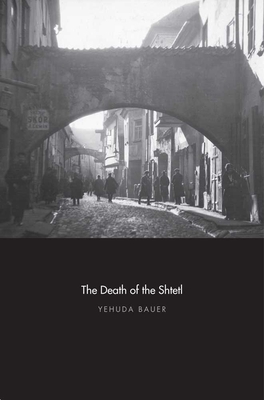 The Death of the Shtetl

In this book, Yehuda Bauer, an internationally acclaimed Holocaust historian, describes the destruction of small Jewish townships, the shtetls, in what was the eastern  part of Poland by the Nazis in 1941–1942. Bauer brings together all available documents, testimonies, and scholarship, including previously unpublished material from the Yad Vashem archives, pertaining to nine representative shtetls. In line with his belief that “history is the story of real people in real situations,” Bauer tells moving stories about what happened to individual Jews and their communities.

Over a million people, approximately a quarter of all victims of the Holocaust, came from the  shtetls. Bauer writes of the relations between Jews and non-Jews (including the actions of rescuers); he also describes attempts to create underground resistance groups, efforts to escape to the forests, and Jewish participation in the Soviet partisan movement. Bauer’s book is a definitive examination of the demise of the shtetls, a topic of vast importance to the history of the Holocaust.

Yehuda Bauer is academic adviser at Yad Vashem, Jerusalem, and professor emeritus of Holocaust studies, Hebrew University. He is the author of many books, including Jews for Sale? and Rethinking the Holocaust, both published by Yale University Press.
Loading...
or
Not Currently Available for Direct Purchase