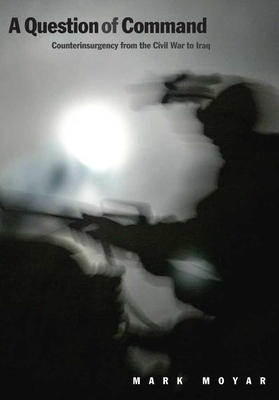 A Question of Command (Paperback)

Moyar presents a wide-ranging history of counterinsurgency, from the Civil War and Reconstruction to Afghanistan and Iraq, that draws on the historical record and interviews with hundreds of counterinsurgency veterans, including top leaders in today’s armed forces. Through a series of case studies, Moyar identifies the ten critical attributes of counterinsurgency leadership and reveals why these attributes have been much more prevalent in some organizations than others. He explains how the U.S. military and America’s allies in Afghanistan and Iraq should revamp their personnel systems in order to elevate more individuals with those attributes.

A Question of Command will reshape the study and practice of counterinsurgency warfare. With counterinsurgency now one of the most pressing issues facing the United States, this book is a must-read for policymakers, military officers, and citizens.

Mark Moyar is director of research at Orbis Operations and the author of Triumph Forsaken: The Vietnam War, 1954–1965 and Phoenix and the Birds of Prey: Counterinsurgency and Counterterrorism in Vietnam.
or support indie stores by buying on
Copyright © 2020 American Booksellers Association