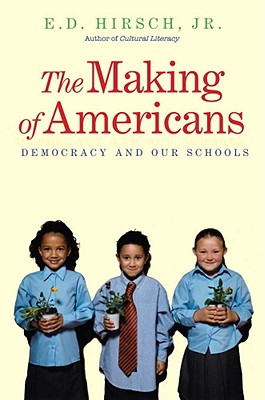 The Making of Americans

Democracy and Our Schools

From the bestselling author of Cultural Literacy, a passionate and cogent argument for reforming the way we teach our children

"Ought to be read by anyone interested in the education and training of the next generation of Americans."—Glenn C. Altschuler, Boston Globe

Why, after decades of commissions, reforms, and efforts at innovation, do our schools continue to disappoint us?  In this comprehensive and thought-provoking book, educational theorist E. D. Hirsch, Jr. offers a masterful analysis of how American ideas about education have veered off course, what we must do to right them, and most importantly why. He argues that the core problem with American education is that educational theorists, especially in the early grades, have for the past sixty years rejected academic content in favor of “child-centered” and “how-to” learning theories that are at odds with how children really learn.  The result is failing schools and widening inequality, as only children from content-rich (usually better-off) homes can take advantage of the schools’ educational methods.

Hirsch unabashedly confronts the education establishment, arguing that a content-based curriculum is essential to addressing social and economic inequality. A nationwide, specific, grade-by-grade curriculum established in the early school grades can help fulfill one of America’s oldest and most compelling dreams: to give all children, regardless of language, religion, or origins, the opportunity to participate as equals and become competent citizens. Hirsch not only reminds us of these inspiring ideals, he offers an ambitious and specific plan for achieving them.


Praise For The Making of Americans: Democracy and Our Schools…

"Based on research in cognitive studies and results from 'core knowledge' schools, Hirsch's case is clear and compelling. His book ought to be read by anyone interested in the education and training of the next generation of Americans."—Glenn C. Altschuler, The Boston Globe

"Pleads for a coherent, content-based, multi-year curriculum to save our democracy from factionalism, inequality and incompetence."—Jay Mathews, Washington Post Book World (Best of 2009 Review)

"[In] the context of the continuing shortcomings of American education and armed with the support of prominent educators, Hirsch once again challenges the prevailing 'child-centered' philosophy, championing a return to a 'subject-centered' approach to learning."—Publishers Weekly

"In The Making of Americans, Hirsch builds on [his] earlier work and widens the lens to connect his ideas on education reform to the fundamental rationales for our system of public schools in the United States. . . . Hirsch identifies two central reasons for the American 'common school': to create social mobility, allowing bright, hard-working students of all origins to enjoy the American dream; and to create social cohesion, binding children of diverse economic, racial, and ethnic backgrounds into citizens of a single nation. . . . Hirsch makes a highly cogent case to support the concept that a common curriculum is necessary in elementary schools to further both goals. . . . American education would be far better off if leaders heeded Hirsch's sound advice to restore a common-core curriculum."—Richard D. Kahlenberg, The American Scholar

". . . Hirsch builds on [his] earlier work and widens the lens to connect his ideas on education reform to the fundamental rationales for our system of public schools in the United States. . . . American education would be far better off if leaders heeded Hirsch's sound advice to restore a common-core curriculum."—Richard D. Kahlenberg, The American Scholar


"E. D. Hirsch is an antidote to our culture wars, our polarization, our taste for demagoguery, our feel-goodism. Reading him always reminds me of this country's great potential. That is what makes him such a great American."—Alan Wolfe, Books & Culture

"E. D. Hirsch has contributed what is to me the most persuasive idea of the past half century on how to improve the performance of American education."—Nathan Glazer, Education Next

"E. D. Hirsch has arguably done more for public school reform in this nation than any living American. . . . It is altogether fitting, then, that in his latest book Hirsch has become overtly political. Beyond linking acquired knowledge to viability in the work place, as he has done in previous books, he attempts to reclaim public schoolings a fundamental part of the political project embarked upon by the founders and continued by Lincoln."—Terrence O. Moore, Claremont Review of Books

"Beyond linking acquired knowledge to viability in the work place. . . [Hirsch] attempts to reclaim public schooling as a fundamental part of the political project embarked upon by the founders and continued by Lincoln."—Terrence O. Moore, Claremont Review of Books

Selected as one of the Best Books of 2009 in the Society and Culture category, Jay Mathews, Washington Post Book World

"The most cogent and persuasive version of [Hirsch’s] views that I have seen. . . . This is not just a good book. It is an important book."—Robert Scholes, Andrew W. Mellon Professor of Humanities Emeritus, Brown University

"E. D. Hirsch is one of the very few academics in this country who can write for a wide audience about complex issues without ever condescending, oversimplifying, or falling into a populist rant."—David Labaree, Professor of Education, Stanford University

"In this important defense of the idea of a common national curriculum, E. D. Hirsch makes a lucid and convincing case that our habit of confusing such a curriculum with retrograde social and educational views has given us ‘sixty years without a curriculum.’"—Gerald Graff, 2008 President, Modern Language Association

"Once again, E.D. Hirsch has written a powerful and illuminating book about public education in America. This time he not only highlights ‘the knowledge deficit’ that has long impaired our students' reading abilities, he also explains how this deficiency is undermining the role of education in developing an informed citizenry. With all the talk in Washington about national standards and what it means for a high school student to be ‘college ready,’ this book is an essential read."—Joel I. Klein, Chancellor, New York City Department of Education

"E.D. Hirsch's The Making of Americans is a wonderful book that is must-reading for everyone who cares about our children and our country. It is the one book I would recommend to every legislator and school board member."—Diane Ravitch, author of Left Back and The Language Police

E. D. Hirsch, Jr., founder of the Core Knowledge Foundation, recently retired as professor of education and humanities at the University of Virginia. His previous books include Cultural Literacy and The Knowledge Deficit.
Loading...
or
Not Currently Available for Direct Purchase