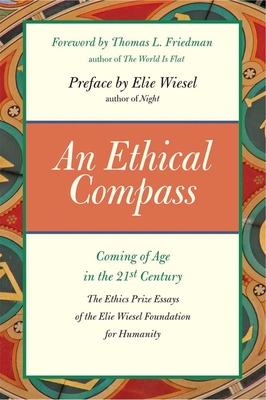 Coming of Age in the 21st Century

In 1986, Elie Wiesel received the Nobel Peace Prize in recognition of his victory over “the powers of death and degradation, and to support the struggle of good against evil in the world.” Soon after, he and his wife, Marion, created the Elie Wiesel Foundation for Humanity. A project at the heart of the Foundation’s mission is its Ethics Prize—a remarkable essay-writing contest through which thousands of students from colleges across the country are encouraged to confront ethical issues of personal significance. The Ethics Prize has grown exponentially over the past twenty years.

“Of all the projects our Foundation has been involved in, none has been more exciting than this opportunity to inspire young students to examine the ethical aspect of what they have learned in their personal lives and from their teachers in the classroom,” writes Elie Wiesel. Readers will find essays on Bosnia, the genocide in Rwanda, sweatshops and globalization, and the political obligations of the mothers of Argentina’s Disappeared. Other essays tell of a white student who joins a black gospel choir, a young woman who learns to share in Ladakh, and the outsize implications of reporting on something as small as a cracked windshield. Readers will be fascinated by the ways in which essays on conflict, conscience, memory, illness (Rachel Maddow’s essay on AIDS appears), and God overlap and resonate with one another.

These essays reflect those who are “sensitive to the sufferings and defects that confront a society yearning for guidance and eager to hear ethical voices,” writes Elie Wiesel. “And they are a beacon for what our schools must realize as an essential component of a true education.”


Praise For An Ethical Compass: Coming of Age in the 21st Century…

“These prize-winning essays from among thousands submitted by young people in a competition sponsored by the Elie Wiesel Foundation over the last twenty years, are exemplary not only for their personal engagement, intellectual acuity, and articulate nature, but also for not yielding up moral issues in despair when dealing with the genocidal enormities and other salient humanitarian challenges of our time. Their range is extraordinary, covering political oppression, racial prejudice, severe economic hardship, AIDS, the terminally ill, the duty of memory, the role of literature, and the struggle for identity. They are brave and diverse documents of a coming of age in an era that tests the ethical compass of all of us.”—Geoffrey Hartman, author of A Scholar's Tale: Intellectual Journey of a Displaced Child of Europe

"Each student featured in this volume views human endeavor through an ethical lens, creating a distinct and distinctly sustainable advantage in navigating our increasingly interconnected and thus ethically interdependent world. These are the types of leaders we desperately need; individuals who think about the ethical dimensions of their decisions and actions, and who are inspired by sustainable values to propel their journeys of innovation, progress, and significance.  Their admirable example is why every aspiring young leader—and their mentors—should read this book."—Dov Seidman, author of HOW and CEO of LRN, corporate sponsor of the Ethics Prize

"Listen to the ethical voices within, Wiesel suggests in his Preface. This is precisely what these student essayists have done. Now the collection will encourage and guide others in doing the same."--Chicago Jewish Star
— Chicago Jewish Star

Elie Wiesel was the author of more than forty books, including the internationally acclaimed memoir Night. He is the recipient of the Nobel Prize for Peace and teaches at Boston University.Thomas Friedman is a Pulitzer Prize–winning journalist and a columnist for the New York Times. He is the author of The World Is Flat: A Brief History of the Twenty-First Century and other best-selling books.
Loading...
or
Not Currently Available for Direct Purchase