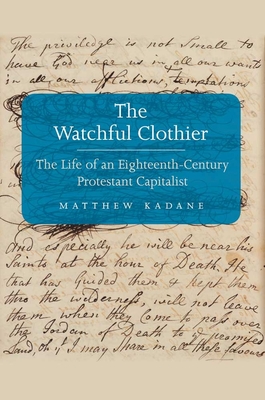 A clothier and a deeply religious man, Joseph Ryder faithfully kept a diary from 1733 until his death, two and a half million words later, in 1768. Recently rediscovered and brilliantly interpreted by historian Matthew Kadane, Ryder’s diary provides an illuminating, real-life perspective on the relationship between capitalism and Protestantism at a time when Britain was rapidly changing from a traditional to a modern society. It also provides fascinating insights on the early modern family, the birth of industrialization, the history of Puritanism, the origins of Unitarianism, melancholy, and the making of the British middle class.

“The Watchful Clothier is one of the most extraordinary works of history I can remember reading. Kadane has unearthed the missing link of Max Weber’s famed ‘Protestant ethic’: the vast spiritual diary of an eighteenth-century tradesman halfway through the transformation from Richard Baxter to Benjamin Franklin.”—Ethan Shagan, University of California Berkeley
— Ethan Shagan

"The personal experience of England's transition to capitalism comes alive in this beautifully-crafted study of a devout Protestant who is also a diligent businessman."—Joyce Appleby, author of The Relentless Revolution: A History of Capitalism
— Joyce Appleby

"Kadane's beautifully researched and written book explores great themes in small compass,'the seismic cultural shifts in early modern Britain' in the diary of a Puritan, the 'revaluation of the middle class' in the struggle of a businessman to live a godly life."—Deirdre N. McCloskey, author of Bourgeois Dignity
— Deirdre N. McCloskey

“This brilliant and beautifully written study of the diary of an eighteenth-century clothier deserves to be ranked with the classics of biographical history. Kadane tackles most of the big questions of the early modern period, chief among them Weber’s study of the relationship between Calvinism and capitalism, and provides an object lesson on the close reading of texts, mining apparently incidental remarks to reveal a host of questions and complexities in his subject’s personality and religious concerns.”—Phyllis Mack, Rutgers University
— Phyllis Mack

"Kadane's analysis of Joseph Ryder's spiritual journal provides an absorbing case study of the complex and stressful relationship between the English puritan tradition, the demands of a burgeoning industrial capitalism and the challenge of rationalist religion. It offers a fresh perspective on the experience of the eighteenth century.”—Keith Wrightson, Yale University
— Keith Wrightson

Matthew Kadane is an associate professor of history at Hobart and William Smith Colleges.