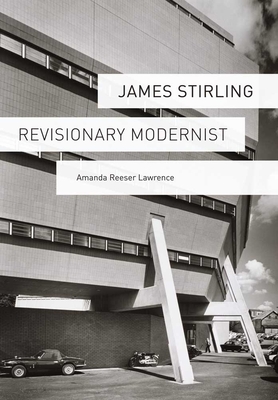 James Stirling (1926–1992) was one of the most influential architects of the late 20th century. His formally inventive yet historically informed designs inspired a generation of architects in his native England and throughout the world. James Stirling: Revisionary Modernist is the first in-depth, book-length analysis of the architect's work. Amanda Reeser Lawrence focuses on six of Stirling's projects from the early 1950s through the late 1970s, offering detailed formal analysis of the buildings and drawings while also mapping his relationship to a broader architectural and cultural context. Though it is widely held that Stirling took a mid-career turn toward postmodernism, Lawrence shows that he was undeniably modern throughout his career. She clarifies the ways in which Stirling understood modernism as inextricably linked to the past and placed his own work in what he termed a "dialogue with architectural tradition."

"Strikingly original. Amanda Lawrence's detailed analysis of Stirling's buildings and drawings allows readers to follow the architect's design strategies and understand how he employed diverse means to embody them. I have never read such a compelling and persuasive assessment of a 20th-century architect's work. An exemplary study and a model for future studies."—Diane Ghirardo, University of Southern California

“This is one of the first, serious academic architectural historical and critical treatments of the breadth of James Stirling’s work. Author Amanda Lawrence contributes as well to continued revisions of modernism and postmodernism, positing a theory based not on stylistic affinity but on compositional structures and evolving notions of reference. There is much here to draw upon, as well as new knowledge and understanding of  Stirling himself.”—Daniel Abramson, Tufts University

“an admirably close analysis of both Stirling’s work and decades of its critical reception."—Metropolis
— Metropolis

Amanda Reeser Lawrence is assistant professor in the School of Architecture at Northeastern University and is founding coeditor of Praxis: A Journal of Writing + Building.
Loading...
or
Not Currently Available for Direct Purchase