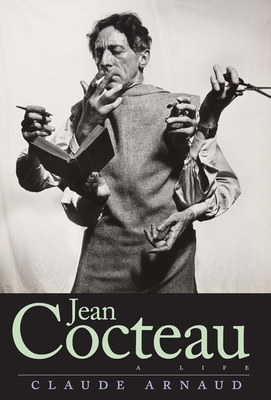 Unevenly respected, easily hated, almost always suspected of being inferior to his reputation, Jean Cocteau has often been thought of as a jack-of-all-trades, master of none. In this landmark biography, Claude Arnaud thoroughly contests this characterization, as he celebrates Cocteau’s “fragile genius—a combination almost unlivable in art” but in his case so fertile.

Arnaud narrates the life of this legendary French novelist, poet, playwright, director, filmmaker, and designer who, as a young man, pretended to be a sort of a god, but who died as a humble and exhausted craftsman. His moving and compassionate account examines the nature of Cocteau’s chameleon-like genius, his romantic attachments, his controversial politics, and his intimate involvement with many of the century’s leading artistic lights, including Picasso, Proust, Hemingway, Stravinsky, and Tennessee Williams. Already published to great critical acclaim in France, Arnaud’s penetrating and deeply researched work reveals a uniquely gifted artist while offering a magnificent cultural history of the twentieth century.

Praise For Jean Cocteau: A Life…

"Sweeping . . . insightful . . . [a] passionate retelling of a life fully lived. . . . Arnaud’s poetic prose, skillfully translated by Elkin and Mandell, sharp observations, and devotion to his subject make this an endlessly rewarding read and invaluable addition to readers' understanding and appreciation of Cocteau."—Publishers Weekly (starred review)

"Arnaud actually succeeds in doing what seemed impossible: he gives readers one single Cocteau . . . bringing each one of the man’s many interests into clear and remarkably even-handed focus . . . a very rewarding look at Cocteau’s ‘perpetual becoming’ . . . [Cocteau] now has a big biography in English that matches the unlikely size of his life."—Steve Donoghue, Open Letters Monthly

"[An] epic. . . . Readers owe Arnaud thanks. . . . Cocteau was never boring, and I can’t think of another full-dress biography with a higher laugh-out-loud count. Arnaud’s scholarly diligence is combined with imaginative sympathy; he makes not only the protagonist but the supporting characters come alive."—Kevin McMahon, Los Angeles Review of Books

"An evocation of a vanished era . . . a labor of love . . . [an] amazing story. . . . The charm of Arnaud’s book is that he seems to re-create the adolescent intensity of Cocteau’s world. . . . Reading it is like diving down to Atlantis. Take a weekend and take the plunge."—Bruce Fleming, Washington Free Beacon

"Arnaud is forthright without being sensationalist . . . [he] gives us Cocteau unwashed yet personally appealing."—Tim Pfaff, Bay Area Reporter

“[Arnaud] goes beyond the myth and brings to life the cultural history of the 20th century. A remarkable accomplishment.”—C. B. Kerr, Choice

"Jean Cocteau was the artistic ringmaster of 20th century Paris. Claude Arnaud has written the definitive—and fascinating—life of this artist and impresario, and along the way has clarified mysteries about his sexuality and his collaboration with the Nazis."—Edmund White

"Arnaud’s incisive and immensely readable biography of the brilliantly witty albeit flawed Cocteau is a triumph. Thank God this essential book has finally been translated. Read it and wallow in twentieth-century art and letters."—John Richardson, author of A Life of Picasso, vols. I–III

"Claude Arnaud’s cornucopian biography give us a marvelous, if in some ways consolingly familiar, portrait of the upper echelons of Parisian aristo artistic circles. . . . Simply everybody is here: from Mistinguett to Marcel Proust, Robert de Montesquiou to Anna de Noailles, Misia Sert to Natalie Barney, we wander through an enchanted period when talent seemed to earn immediate rewards, spiced by an undercurrent of discreet homosexuality. . . . Claude Arnaud’s work is welcome for reminding us just how remarkable its subject was. It is also welcome for its argument that the twentieth century has left few artistic survivors."—Lachlan Mackinnon, Times Literary Supplement

Claude Arnaud is a writer and recipient of the 2006 Prix Femina Essai. He lives in Paris, France. Lauren Elkin is a lecturer in English and comparative literature at the American University of Paris. Charlotte Mandell is an award-winning translator of more than thirty books.
Loading...
or
Not Currently Available for Direct Purchase