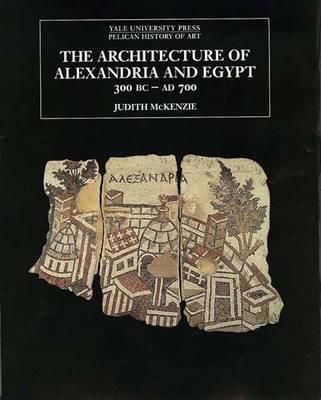 The first reconstruction of the architecture of ancient Alexandria and Egypt, long believed lost beyond recovery

This masterful history of the monumental architecture of Alexandria, as well as of the rest of Egypt, encompasses an entire millennium—from the city’s founding by Alexander the Great in 331 B.C. to the years just after the Islamic conquest of A.D. 642. Long considered lost beyond recall, the architecture of ancient Alexandria has until now remained mysterious. But here Judith McKenzie shows that it is indeed possible to reconstruct the city and many of its buildings by means of meticulous exploration of archaeological remains, written sources, and an array of other fragmentary evidence.

The book approaches its subject at the macro- and the micro-level: from city-planning, building types, and designs to architectural style. It addresses the interaction between the imported Greek and native Egyptian traditions; the relations between the architecture of Alexandria and the other cities and towns of Egypt as well as the wider Mediterranean world; and Alexandria’s previously unrecognized role as a major source of architectural innovation and artistic influence. Lavishly illustrated with new plans of the city in the Ptolemaic, Roman, and Byzantine periods; reconstruction drawings; and photographs, the book brings to life the ancient city and uncovers the true extent of its architectural legacy in the Mediterranean world.

Judith McKenzie is member of the sub-faculty of archaeology, Oxford University.

Praise For The Architecture of Alexandria and Egypt 300 B.C.--A.D. 700 (The Yale University Press Pelican History of Art Series)…

". . . a richly textured presentation. . . . [The book] will likely be the first place to which anyone interested in the architecture of post-pharaonic Egypt will turn for many years to come."--Hector Williams, Egyptian Archaeology
— Hector Williams

"Outstanding. . . and beautifully written. . . . This is a book that all those interested in the art and architecture of the eastern Mediterranean, Pompeian wall-paintings, Ancient Egypt, and indeed Islamic architecture should study and learn from."--Andrew Selkirk, Current World Archaeology
— Andrew Selkirk

"McKenzie [brings] together a huge body of material, much of it previously difficult to access, and [presents] it all in a single, authoritative volume. . . . an essential resource for research into Hellenistic, Roman and late antique architecture."--Ruth Westgate, Journal of Hellenic Studies
— Ruth Westgate

". . . a detailed examination of the distinctive contribution that Alexandria made to the arts of Egypt and of the Eastern Mediterranean. . . . McKenzie has provided a landmark work of enduring value that mixes erudition with clarity."--Ross Burns, Levant
— Ross Burns

"This book should be an absolute 'must-read' for someone visiting Alexandria, but also for the visitor to other parts of Egypt: the great Ptolemaic temples. . . the many Coptic churches, monasteries and even the early mosques."--Ancient Egypt