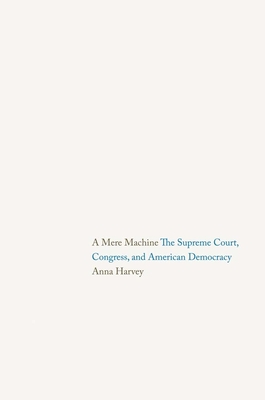 Introductory textbooks on American government tell us that the Supreme Court is independent from the elected branches and that independent courts better protect rights than their more deferential counterparts. But are these facts or myths? In this groundbreaking new work, Anna Harvey reports evidence showing that the Supreme Court is in fact extraordinarily deferential to congressional preferences in its constitutional rulings. Analyzing cross-national evidence, Harvey also finds that the rights protections we enjoy in the United States appear to be largely due to the fact that we do not have an independent Supreme Court. In fact, we would likely have even greater protections for political and economic rights were we to prohibit our federal courts from exercising judicial review altogether. Harvey’s findings suggest that constitutional designers would be wise to heed Thomas Jefferson’s advice to “let mercy be the character of the law-giver, but let the judge be a mere machine.”

Praise For A Mere Machine: The Supreme Court, Congress, and American Democracy…

"Using innovative analytic techniques, Anna Harvey offers a surprising argument, that the Supreme Court responds to changes in the partisan composition of the House of Representatives. Her extension of the argument to raise questions about the value of judicial independence and judicial review in established democracies is especially interesting."—Mark Tushnet, Harvard Law School
— Mark Tushnet

"A rigorous examination of the role of the Supreme Court in the American system of checks and balances."—Jeffrey A. Segal, SUNY Distinguished Professor, Chair, Department of Political Science, Stony Brook University
— Jeffrey Segal

"There is no scholar whose work on judicial independence is more provocative or demands greater attention than Anna Harvey.  Professor Harvey’s empirical finding that the U.S. Supreme Court is responsive to the preferences of the House of Representatives poses a profound challenge to the conventional wisdom about both judicial independence and the Supreme Court.   This conclusion is documented at length with painstaking methodological rigor and transparency.  In particular, her strategy of drawing inferences from what she terms the “missing docket,” or the cases that the Court declines to hear, is instructive and groundbreaking.    This book ought to be a must-read for constitutional scholars, law and courts scholars, judicial politics scholars, and public law scholars alike." - David Law, Professor of Law and Professor of Political Science, Washington University in St. Louis
— David Law

Anna Harvey is associate professor of political science at New York University.
Loading...
or support indie stores by buying on