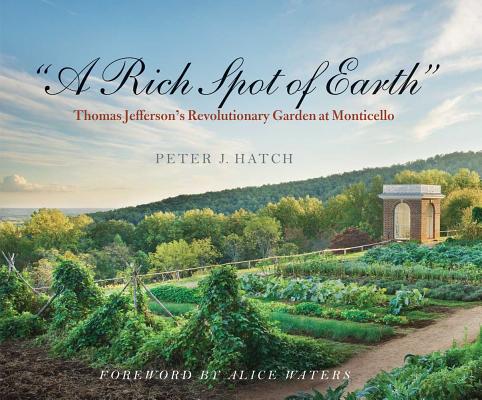 "A Rich Spot of Earth"

Were Thomas Jefferson to walk the grounds of Monticello today, he would no doubt feel fully at home in the 1,000-foot terraced vegetable garden where the very vegetables and herbs he favored are thriving. Extensively and painstakingly restored under Peter J. Hatch's brilliant direction, Jefferson's unique vegetable garden now boasts the same medley of plants he enthusiastically cultivated in the early nineteenth century. The garden is a living expression of Jefferson's genius and his distinctly American attitudes. Its impact on the culinary, garden, and landscape history of the United States continues to the present day.

Graced with more than 200 full-color illustrations, ""A Rich Spot of Earth"" is the first book devoted to all aspects of the Monticello vegetable garden. Hatch guides us from the asparagus and artichokes first planted in 1770 through the horticultural experiments of Jefferson's retirement years (1809 1826). The author explores topics ranging from labor in the garden, garden pests of the time, and seed saving practices to contemporary African American gardens. He also discusses Jefferson's favorite vegetables and the hundreds of varieties he grew, the half-Virginian half-French cuisine he developed, and the gardening traditions he adapted from many other countries.


Praise For "A Rich Spot of Earth": Thomas Jefferson's Revolutionary Garden at Monticello…

"Peter Hatch's vibrant and enthusiastic passion for preserving Thomas Jefferson's farming legacy at Monticello reminds us all of the time-tested continuity and historical root of this kind of agriculture."—Alice Waters
-Alice Waters

“In this fascinating book, Peter Hatch wonderfully weaves together his deep understanding of Monticello’s soil with his scholarly knowledge of Jefferson’s legacy as a gardener.”—Andrea Wulf, author of Founding Gardeners
-Andrea Wulf

“Peter Hatch is the ultimate authority on America’s ultimate vegetable garden.  Learn all about the genius of the place.  Hatch’s fascinating account will enrich your garden and your life.”—Amy P. Goldman, Chair of the Board, Seed Savers Exchange
-Amy P. Goldman

"Peter Hatch brings the horticultural legacy of Thomas Jefferson to life.  A Rich Spot of Earth affords us a clear and compelling view into the revolutionary thinking of Jefferson, illuminating for the reader his approach to food, diversity, democracy, and freedom – making the genius of Jefferson, perhaps, as relevant today as at any other time in American history."—P. Allen Smith, author of The Garden Home Series
-P. Allen Smith

"Elegantly produced and artfully augmented by stunning, evocative photographs of the estate and the bounty it produces, Hatch’s homage establishes Jefferson as the clear forefather of modern organic and sustainable garden movements."—Carol Haggas, Booklist
-Carol Haggas

"...there is much interesting archive material, and pleasing vegetable still-lifes composed with the care of a Dutch master."—Ambra Edwards, Gardens Illustrated
-Ambra Edwards

"Beautifully illustrated, authoritative. . . . It is wonderful to find out that the man who contributed so much to the republic in which we live also set his contemporaries—and posterity—such a salutary example in other ways as well."—Martin Rubin, Washington Times
-Martin Rubin

"A Rich Spot of Earth: Thomas Jefferson's Revolutionary Garden at Monticello presents a rarely seen side of the man. Here is Jefferson with mud-splattered boots laying out garden beds and carefully setting seeds with dirty hands: a Founding Father not on a lofty pedestal, but joyfully competing with neighbors in an annual contest to see who could bring the first spring peas to table."—David Maurer, Richmond Times-Dispatch
-David Maurer

"Breathtaking. The photos are beautiful, the research is impeccable, and the story is captivating. From a historian's perspective, Hatch provides a new depth to the understanding of Jefferson's character. From a gardener's perspective, the book serves as an inspiration to grow and treasure heirlooms."—Heirloom Adventures Blog

"The book is absolutely beautiful and tells a fascinating story. It provides pure pleasure for those interested in tasty food lavishly presented. And it opens up a new and interesting way of thinking about Jefferson, the Founding Father who remains most relevant and malleable for Americans."—Erik Loomis, Lawyers, Guns, and Money Blog
-Erik Loomis

As Director Emeritus of Gardens and Grounds at Monticello, Peter J. Hatch was responsible for the maintenance, interpretation, and restoration of its 2,400-acre landscape from 1977 until 2012. He lives in Charlottesville, VA.