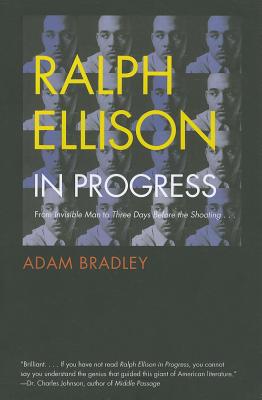 Ralph Ellison may be the preeminent African-American author of the twentieth century, though he published only one novel, 1952’s Invisible Man. He enjoyed a highly successful career in American letters, publishing two collections of essays, teaching at several colleges and universities, and writing dozens of pieces for newspapers and magazines, yet Ellison never published the second novel he had been composing for more than forty years. A 1967 fire that destroyed some of his work accounts for only a small part of the novel’s fate; the rest is revealed in the thousands of pages he left behind after his death in 1994, many of them collected for the first time in the recently published Three Days Before the Shooting . . . .

Ralph Ellison in Progress is the first book to survey the expansive geography of Ellison’s unfinished novel while re-imaging the more familiar, but often misunderstood, territory of Invisible Man. It works from the premise that understanding Ellison’s process of composition imparts important truths not only about the author himself but about race, writing, and American identity. Drawing on thousands of pages of Ellison’s journals, typescripts, computer drafts, and handwritten notes, many never before studied, Adam Bradley argues for a shift in scholarly emphasis that moves a greater share of the weight of Ellison’s literary legacy to the last forty years of his life and to the novel he left forever in progress.

Adam Bradley is associate professor of English at the University of Colorado, Boulder. He is coeditor of The Anthology of Rap (published by Yale University Press), coeditor of Ralph Ellison's unfinished second novel, Three Days Before the Shooting . . . , and the author of Book of Rhymes: The Poetics of Hip Hop. He lives in Colorado.
Loading...
or support indie stores by buying on