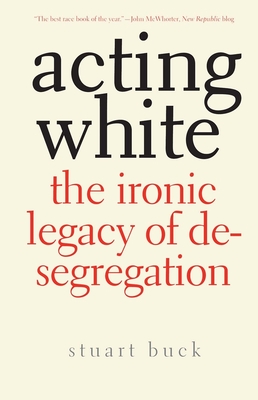 The Ironic Legacy of Desegregation

The unintended consequences of desegregation

Commentators from Bill Cosby to Barack Obama have observed the phenomenon of black schoolchildren accusing studious classmates of “acting white.” How did this contentious phrase, with roots in Jim Crow-era racial discord, become a part of the schoolyard lexicon, and what does it say about the state of racial identity in the American system of education?

The answer, writes Stuart Buck in this frank and thoroughly researched book, lies in the complex history of desegregation. Although it arose from noble impulses and was to the overall benefit of the nation, racial desegegration was often implemented in a way that was devastating to black communities. It frequently destroyed black schools, reduced the numbers of black principals who could serve as role models, and made school a strange and uncomfortable environment for black children, a place many viewed as quintessentially “white.”

Drawing on research in education, history, and sociology as well as articles, interviews, and personal testimony, Buck reveals the unexpected result of desegregation and suggests practical solutions for making racial identification a positive force in the classroom.

An honors graduate of Harvard Law School, Stuart Buck is a Ph.D. student in education policy at the University of Arkansas.  His work has appeared in the Harvard Law Review, the Administrative Law Review, and several other scholarly journals.
Loading...
or support indie stores by buying on