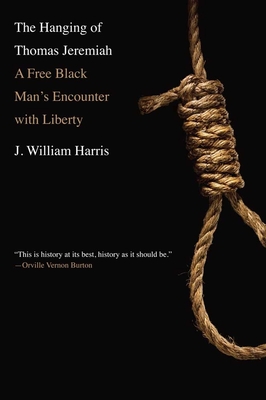 The Hanging of Thomas Jeremiah

The tragic untold story of how a nation struggling for its freedom denied it to one of its own: a free Black man

"A searing portrayal of the central paradox of the American Revolution—the centrality of slavery to the struggle for political liberty."—Laurel Thatcher Ulrich, Harvard University

"An insightful reflection and commentary on the vexed relationships among liberty, slavery, and the British Empire in the era of the Declaration of Independence."—Richard D. Brown, The Journal of Law and History Review

In 1775, Thomas Jeremiah was one of fewer than five hundred “Free Negros” in South Carolina and, with an estimated worth of £1,000 (about $200,000 in today’s dollars), possibly the richest person of African descent in British North America. A slaveowner himself, Jeremiah was falsely accused by whites—who resented his success as a Charleston harbor pilot—of sowing insurrection among slaves at the behest of the British.

Chief among the accusers was Henry Laurens, Charleston’s leading patriot, a slaveowner and former slave trader, who would later become the president of the Continental Congress. On the other side was Lord William Campbell, royal governor of the colony, who passionately believed that the accusation was unjust and tried to save Jeremiah’s life but failed. Though a free man, Jeremiah was tried in a slave court and sentenced to death. In August 1775, he was hanged and his body burned.

J. William Harris tells Jeremiah’s story in full for the first time, illuminating the contradiction between a nation that would be born in a struggle for freedom and yet deny it—often violently—to others.

J. William Harris is professor of history at the University of New Hampshire. He is the author of The Making of the American South, Deep Souths (finalist for the 2002 Pulitzer Prize in history), and Plain Folk and Gentry in a Slave Society. He lives in Arlington, MA.
Loading...
or
Not Currently Available for Direct Purchase