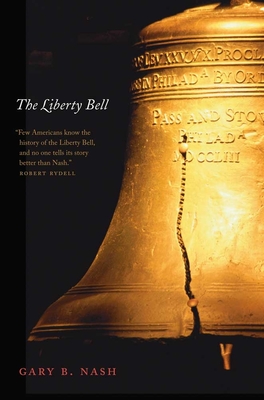 The Liberty Bell (Icons of America)

The distinguished historian Gary B. Nash recasts the legacy of one of America’s most enduring icons of freedom

Each year, more than two million visitors line up near Philadelphia’s Independence Hall and wait to gaze upon a flawed mass of metal forged more than two and a half centuries ago. Since its original casting in England in 1751, the Liberty Bell has survived a precarious journey on the road to becoming a symbol of the American identity, and in this masterful work, Gary B. Nash reveals how and why this voiceless bell continues to speak such volumes about our nation.

A serious cultural history rooted in detailed research, Nash’s book explores the impetus behind the bell’s creation, as well as its evolutions in meaning through successive generations. With attention to Pennsylvania’s Quaker roots, he analyzes the biblical passage from Leviticus that provided the bell’s inscription and the valiant efforts of Philadelphia’s unheralded brass founders who attempted to recast the bell after it cracked upon delivery from London’s venerable Whitechapel Foundry. Nash fills in much-needed context surrounding the bell’s role in announcing the Declaration of Independence and recounts the lesser-known histories of its seven later trips around the nation, when it served as a reminder of America’s indomitable spirit in times of conflict. Drawing upon fascinating primary source documents, Nash’s book continues a remarkable dialogue about a symbol of American patriotism second only in importance to the Stars and Stripes.

Gary B. Nash is professor of history and director of the National Center for History in the Schools at UCLA. He is former president of the Organization of American Historians, and his 1979 book The Urban Crucible: Social Change, Political Consciousness, and the Origins of the American Revolution was a finalist for the Pulitzer Prize in history. He lives in Los Angeles.
Loading...
or support indie stores by buying on