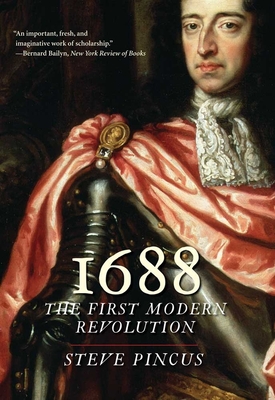 Based on new archival information, this book upends two hundred years of scholarship on England’s Glorious Revolution to claim that it—not the French Revolution—was the first truly modern revolution

For two hundred years historians have viewed England’s Glorious Revolution of 1688–1689 as an un-revolutionary revolution—bloodless, consensual, aristocratic, and above all, sensible. In this brilliant new interpretation Steve Pincus refutes this traditional view.

By expanding the interpretive lens to include a broader geographical and chronological frame, Pincus demonstrates that England’s revolution was a European event, that it took place over a number of years, not months, and that it had repercussions in India, North America, the West Indies, and throughout continental Europe. His rich historical narrative, based on masses of new archival research, traces the transformation of English foreign policy, religious culture, and political economy that, he argues, was the intended consequence of the revolutionaries of 1688–1689.

James II developed a modernization program that emphasized centralized control, repression of dissidents, and territorial empire. The revolutionaries, by contrast, took advantage of the new economic possibilities to create a bureaucratic but participatory state. The postrevolutionary English state emphasized its ideological break with the past and envisioned itself as continuing to evolve. All of this, argues Pincus, makes the Glorious Revolution—not the French Revolution—the first truly modern revolution. This wide-ranging book reenvisions the nature of the Glorious Revolution and of revolutions in general, the causes and consequences of commercialization, the nature of liberalism, and ultimately the origins and contours of modernity itself.

Steve Pincus is professor of history at Yale University. He is the author of Protestantism and Patriotism and England's Glorious Revolution. He lives in New Haven, CT.

Praise For 1688: The First Modern Revolution (The Lewis Walpole Series in Eighteenth-Century Culture and History)…

"Mr. Pincus’s cogently argued account of what really happened during England’s revolution destroys many comforting notions that have prevailed for more than 200 years. . . . It leaves the reader with something much more exciting: a new understanding of the origins of the modern, liberal state."—Economist

"Pincus’s marvellously learned book is the product of years of industrious archival labour."—Jonathan Clark, Times Literary Supplement
"[A]n important, fresh, and imaginative work of scholarship. . . . It will have recast the origins of modern England as well as the history of the revolution of 1688."—Bernard Bailyn, New York Review of Books
"There is also much that is impressive and exciting about this book, not only its archival reach but also Pincus's intellectual ambition and his determination to pursue his theme of modernity as well as his willingness to embrace comparative issues."—Jeremy Black, American Historical Review
"Meticulously researched and deftly written."—Andrew Stuttaford, National Review

"One of the most ambitious works of history to appear in recent years--a radical reinterpretation of events that intends not merely to update and improve prior accounts but to vanquish them conclusively. The book is a marvel of scholarship."—The National

"The grand aspirations of this book and the broad sweep of its claims will insure that it is taken seriously by scholars working on the Glorious Revolution for years to come...It will stand out as the opening salvo in a series of historical battles that will light up 1688 in newly vibrant tones."—Paul Monod, Journal of Church History
"A significant contribution to the scholarship of the period. . . . Pincus develops his analysis through lively writing informed by extensive primary-source research. . . . There is much to be said for Pincus's approach, blending economic and political theory together with seemingly effortless ease in a well-written and highly readable account. . . . In the end, there is every reason to think that his analysis of the events of late-seventeenth-century England will, for want of a better term, revolutionize our understanding of the period."—Scott Hendrix, Canadian Journal of History
Bronze Medal winner for the 2010 Independent Publishers Book Awards in the History Category
Winner of the 2010 Gustav Ranis International Book Prize, given by the MacMillan Center
Honorable Mention in the Non-Fiction category of the 2009 New England Book Festival sponsored by the Larimar St. Croix Writers Colony, The Hollywood Creative Directory; eDivvy, Shopanista and Westside Websites
A finalist in the category of Nonfiction for the 2010 Connecticut Book Award, given by the Connecticut Center for the Book
Winner of the 2010 Morris D. Forkosch Prize given by the American Historical Association
"Utterly extraordinary."—Don Herzog, University of Michigan

"We all know that the year 1688 is a milestone in England's history; now, thanks to Steve Pincus, the book 1688 will be a milestone in its historiography.  Pincus transforms what once seemed a peaceful compromise among agreeable aristocrats into a fractious and all-encompassing crisis, the ‘first modern revolution.’ Provocative, erudite, and accessible, 1688 is a must read for anyone interested in seventeenth-century Europe and its possessions."—Cynthia Herrup, University of Southern California

"In this remarkable work of scholarship, vast in scope and profound in its implications, Pincus challenges Macaulay and the orthodox view that the Glorious Revolution was moderate, peaceful, and conservative, and reveals a violent transformational event that revolutionized England's state, church, and political economy, and introduced political modernity."—Bernard Bailyn, Harvard University
"A radical interpretation of a radical revolution.  Steve Pincus's brilliantly researched account of the extraordinary events of the 1680s and 1690s mounts an insuperable challenge to the comfortable view that the Glorious Revolution was another instance of British consensus politics, pragmatism, and common sense. 1688 recaptures the revolutionary nature of the Glorious Revolution and its far-reaching and interconnected conflicts over foreign policy, political economy, religion, and the nature of the modern state."—John Brewer, California Institute of Technology

"A magnificent, fully documented, very well written study of how the first thorough-going modern revolution was achieved with effort and against substantial obstacles over several years.  It was bloody and popular, not merely a palace coup achieved with little loss of life, as is commonly held.  Taking a broader chronological view and considering more aspects of society than previous historians, Pincus convincingly shows how England had become a commercial society by the 1680s, and the race was on to harness new wealth—a race between the absolutist modernizing vision of James II and the more tolerant and liberty-minded vision of his opponents.  What emerged was the first modern state, with independent financial institutions and a strong sense of national and civil, as opposed to confessional, interest.  The triumph of William III and his supporters was a conscious re-ordering of the place of the three kingdoms on the European and world stage.  Pincus's commitment to vigorous argument (in which he overturns many received views; his definition of revolution itself is bracingly refreshing) makes this book exciting reading, and will raise fascinated interest in the late 17th-century for many years to come.  For anyone interested in modern liberal society, its origins, and why it is worth defending, this book is indispensable."—Nigel Smith, Princeton University