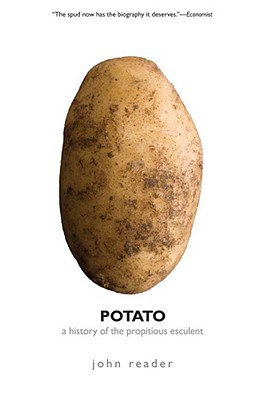 A History of the Propitious Esculent

The long journey of the potato, from Incan gardens in the Andes thousands of years ago to a NASA manned rocket destined for Mars in the twenty-first century

The potato—humble, lumpy, bland, familiar—is a decidedly unglamorous staple of the dinner table. Or is it? John Reader’s narrative on the role of the potato in world history suggests we may be underestimating this remarkable tuber. From domestication in Peru 8,000 years ago to its status today as the world’s fourth largest food crop, the potato has played a starring—or at least supporting—role in many chapters of human history. In this witty and engaging book, Reader opens our eyes to the power of the potato.

Whether embraced as the solution to hunger or wielded as a weapon of exploitation, blamed for famine and death or recognized for spurring progress, the potato has often changed the course of human events. Reader focuses on sixteenth-century South America, where the indigenous potato enabled Spanish conquerors to feed thousands of conscripted native people; eighteenth-century Europe, where the nutrition-packed potato brought about a population explosion; and today’s global world, where the potato is an essential food source but also the world’s most chemically-dependent crop. Where potatoes have been adopted as a staple food, social change has always followed. It may be “just” a humble vegetable, John Reader shows, yet the history of the potato has been anything but dull.


Praise For Potato: A History of the Propitious Esculent…

"[This] accessible account embraces the latest scholarship and addresses the failings of previous works on the subject. Indeed the book, like the tuber it describes, fills a void: the spud now has the biography it deserves."—Economist

"As a staple of the global diet, the potato is worth this digestible book . . ."—Iain Finlayson, Times

". . . rarely has this kind of thing been done so well."—Giles Foden, Conde Nast Traveller

"Potato is more than a history of the spud. . . . [This] is a history of colonialization, industrialization, and globalization whose perspective is determined by the evolutions and adaptations of the 'propitious esculent.' . . . Highly recommended."—A. B. Audant, Choice

"[Potato is] the story of the power of a species of plant to influence and to shape the development of world cultures."—James P. Hammersmith, Southern Humanities Review

John Reader is a writer and photojournalist who holds an honorary research fellowship in the Department of Anthropology at University College London. He lives in Surrey, UK.
Loading...
or support indie stores by buying on
(This book is on backorder)