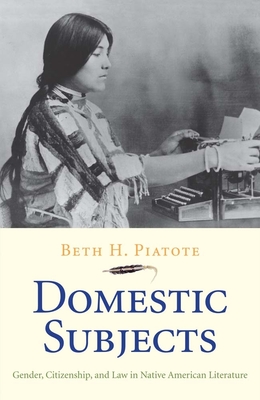 Amid the decline of U.S. military campaigns against Native Americans in the late nineteenth century, assimilation policy arose as the new front in the Indian Wars, with its weapons the deployment of culture and law, and its locus the American Indian home and family. In this groundbreaking interdisciplinary work, Piatote tracks the double movement of literature and law in the contest over the aims of settler-national domestication and the defense of tribal-national culture, political rights, and territory.

"In a richly nuanced and historically informed interpretation, Beth Piatote offers a series of revelatory readings that suture the political world of law and policy with the imaginative cultural world of texts and stories. Engaged . . . analytically around domesticity and gender, and written in clear, often beautiful prose, Domestic Subjects will be an important touchstone in contemporary Native American literary studies.”—Philip Deloria, author of Playing Indian
— Philip Deloria

"Piatote's luminous readings display both force and subtlety. She brings American legal and cultural patterns into sharper focus by opening up the achievements of indigenous American writers who were resourceful cultural critics as well as accomplished creative actors. This exciting book is one of the best arguments I have seen for a more inclusive and interdisciplinary literary history of the United States. It is a great and welcome pleasure to read what Piatote has to say, along with the writers she represents.”—Laura Wexler, Yale University
— Laura Wexler

“In an interdisciplinary tour de force, Piatote demonstrates that Indian wars are wars on Indian family structures, with consequences for all: including Mormons, gays, immigrants, middle-class white men and women. Domestic Subjects illuminates and deepens our understanding of a shared human world.”—Tsianina Lomawaima, author of To Remain an Indian: Lessons in Democracy from a Century of Native American Education

"Piatote offers an original and luminous reading of literary works by Native American writers from the late 19th and early 20th centuries whose narratives 'illuminate and contest the force of federal Indian law and policy.' This is a must read."—N. Bruce Duthu, Dartmouth College
— N. Bruce Duthu

"Deftly weaving together analyses of literature, law, history, and gender, Beth Piatote elegantly documents how the Indigenous home became the primary site of struggle for Indigenous families against the forces of U.S. and Canadian domestication in the assimilation era."—Margaret D. Jacobs, University of Nebraska-Lincoln
— Margaret D. Jacobs

"Beth Piatote’s Domestic Subjects wonderfully explores the ambivalences, difficulties, and possibilities of living through the state-organized assault on Native peoples in the late nineteenth and early twentieth centuries, offering readings that powerfully attend to the affective life of settler colonialism."—Mark Rifkin, University of North Carolina at Greensboro
— Mark Rifkin

Beth H. Piatote is associate professor of Native American studies at the University of California, Berkeley.