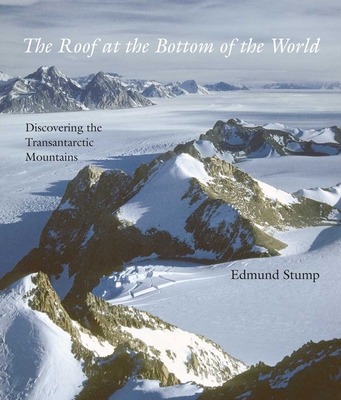 The Roof at the Bottom of the World

A fascinating portrait and history of the most obscure mountains on Earth, by a modern scientist-explorer with unsurpassed knowledge of the region

The Transantarctic Mountains are the most remote mountain belt on Earth, an utterly pristine wilderness of ice and rock rising to majestic heights and extending for 1,500 miles. In this book, Edmund Stump is the first to show us this continental-scale mountain system in all its stunning beauty and desolation, and the first to provide a comprehensive, fully illustrated history of the region's discovery and exploration.

The author not only has conducted extensive research in the Transantarctic Mountains during his forty-year career as a geologist but has also systematically photographed the entire region. Selecting the best of the best of his more than 8,000 photographs, he presents nothing less than the first atlas of these mountains. In addition, he examines the original firsthand accounts of the heroic Antarctic explorations of James Clark Ross (who discovered the mountain range in the early 1840s), Robert Falcon Scott, Ernest Shackleton, Roald Amundsen, Richard Byrd, and scientists participating in the International Geophysical Year (1957–1958). From these records, Stump is now able to trace the actual routes of the early explorers with unprecedented accuracy. With maps old and new, stunning photographs never before published, and tales of intrepid explorers, this book takes the armchair traveler on an expedition to the Antarctic wilderness that few have ever seen.


Praise For The Roof at the Bottom of the World: Discovering the Transantarctic Mountains…

“The modern maps and images on which [Stump] reconstructs the passages of the early explorers are a significant and unequaled achievement, created with a passion that seems obvious looking at them.”—Guy G. Guthridge, National Science Foundation

"Noted geologist, Stump, leads us to the majestic mountains of Antarctic both as scientist and a writer with a passion for polar history. A noteworthy achievement."—Ross A. Virginia, Myers Family Professor of Environmental Science Director, Institute of Arctic Studies Dartmouth College Hanover NH
— Ross A. Virginia

“Best, he includes very fine topographic maps, color photographs (many his own) and satellite images. And most helpful for anyone ever confused about just where and how the explorers made their way, Stump has superimposed the actual routes they took on many of the images.”—Robert Harris, New York Times Book Review
— Robert Harris

“Thanks to the stunning photographs—many by the author—this solid and dependable book is as beautiful as the mountains it describes.”—Nature
— Nature

“Nowhere will readers find a more complete history of the discovery and exploration of the Transantarctic Mountains than in this book.”—Library Journal
— Library Journal

Edmund Stump is professor of exploration at Arizona State University. He is also a geologist, polar explorer, mountaineer, and photographer specializing in the geology of the Transantarctic Mountains. He has served as principal investigator or chief scientist on many scientific field trips to Antarctica, most recently a 2010–2011 National Science Foundation expedition to the Beardmore Glacier area. He lives in Tempe, AZ.
Loading...
or
Not Currently Available for Direct Purchase