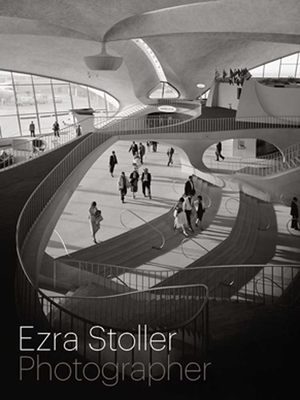 Ezra Stoller's iconic photographs of 20th-century architectural masterpieces, such as Frank Lloyd Wright's Fallingwater and Mies van der Rohe's Seagram Building, are often cited in aiding the rise of modernism in America. Stoller (1915–2004) elevated architectural photography to an art form, capturing the mood of numerous buildings in their best light.

Living and working in New York from the early 1940s to the mid-1970s, Stoller photographed buildings by such architects as Alvar Aalto, Eero Saarinen, Marcel Breuer, Paul Rudolph, and Louis I. Kahn. His striking images earned him the admiration of critics and contemporaries, but few people are aware of the stunning breadth of his oeuvre, which also included domestic and industrial spaces and important editorial depictions of American labor in the 1950s and 1960s. Ezra Stoller, Photographer, a long-awaited and lavishly illustrated survey of Stoller's artistic accomplishments, examines the photographer's full range with a fresh eye and unprecedented scope, offering a unique commentary on postwar America's changing landscape.

“[A] beautifully-designed and well-written book.”—Oculus
— Oculus

“Show[s] a new perspective of post-war America, while also offering some of the images that helped define the cultural memory of mid-century design.”—Wallpaper
— Wallpaper

“From iconic images that capture the rise of Modernism to lesser-known prints celebrating industry and mechanization, the book brings to light the full range of work of the celebrated shutterbug.”—Architect
— Architect

“Ezra Stoller, Photographer is a handsome volume on the onetime industrial-design student who studied architecture with Edward Durell Stone, photographed homes for Ladies' Home Journal, and carved out a niche for himself as 'the photographer of choice for architects of curtain-walled corporate landmarks,'"—William Morgan, Architectural Record
— William Morgan

"Stoller's photographs, like those of Atget, are evidence for historical occurences: reducing the products of architecture to mere objects, and . . . [making] them transparent, reliable, truthful witnesses to their time."--Casabella
— Casabella

“A handsome volume on the one-time industrial design student who studied architecture with Edward Durell Stone, photographed homes for Ladies’ Home Journal, and carved out a niche for himself as the ‘photographer of choice for architects of curtain-walled corporate landmarks,’ as critic John Morris Dixon notes in one essay.”—Architectural Record
— Architectural Record

Nina Rappaport is an architectural critic, a curator, and a historian. Erica Stoller is director of Esto, the photographic agency founded by Ezra Stoller. Andy Grundberg is chair of the photography department and dean of the Corcoran College of Art and Design. Akiko Busch is the author of several books, including Geography of Home: Writings on Where We Live. John Morris Dixon is former editor of Progressive Architecture and has written for such publications as Architect, Architectural Record, and Competitions.
Loading...
or support indie stores by buying on
(This book is on backorder)