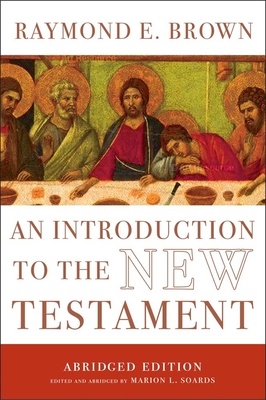 An Introduction to the New Testament (Paperback)

Since its publication in 1997, Raymond Brown’s Introduction to the New Testament has been widely embraced by modern readers seeking to understand the Christian Bible. Acknowledged as a paragon of New Testament studies in his lifetime, Brown was a gifted communicator who wrote with ease and clarity.

Abridged by Marion Soards, who worked with Brown on the original text, this new, concise version maintains the essence and centrist interpretation of the original without tampering with Brown’s perspective, insights, or conclusions. The biblical writings themselves remain the focus, but there are also chapters dealing with the nature, origin, and interpretation of the New Testament texts, as well as chapters concerning the political, social, religious, and philosophical world of antiquity. Furthermore, augmenting Brown’s commentary on the New Testament itself are topics such as the Gospels’ relationship to one another; the form and function of ancient letters; Paul’s thought and life, along with his motivation, legacy, and theology; a reflection on the historical Jesus; and a survey of relevant Jewish and Christian writings.

Praise For An Introduction to the New Testament: The Abridged Edition (The Anchor Yale Bible Reference Library)…

"During his career, Brown has enlightened and challenged scholars. . . . Highly recommended."—Library Journal

"There is likely to be no better one-volume introduction to the New Testament."—Michael Mates, UNRV History

"A truly magnificent book, composed by our Catholic national treasure."—Commonweal

"A tour de force by a great scholarly mind."—America