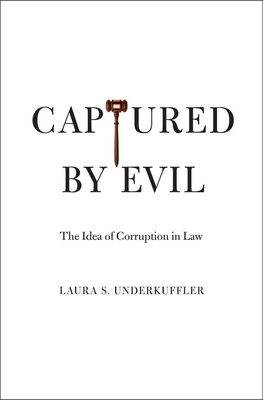 The Idea of Corruption in Law

One of the most powerful words in the English language, "corruption" is also one of the most troubled concepts in law. According to Laura Underkuffler, it is a concept based on religiously revealed ideas of good and evil. But the notion of corruption defies the ordinary categories by which law defines crimes—categories that punish acts, not character, and that eschew punishment on the basis of religion and emotion. Drawing on contemporary examples—including former assemblywoman Diane Gordon and former governor Rod Blagojevich—Underkuffler explores the implications and dangers of maintaining such an archaic concept at the heart of criminal law.

"Underkuffler challenges the traditional rational and logical characterizations of corruption and defends a highly original and insightul proposal. In her view corruption is an emotional concept grounded in religious ideas defying traditional criminal law doctrines. This book is a fantastic contribution to the study of corruption as well as more generally to the study of law and culture."—Alon Harel, Hebrew University Law School

Laura Underkuffler is Associate Dean for Academic Affairs and J. DuPratt White Professor of Law at Cornell University. She lives in Portland, Maine.
Loading...
or support indie stores by buying on