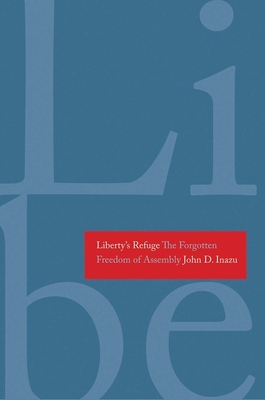 The Forgotten Freedom of Assembly

This original and provocative book looks at an important constitutional freedom that today is largely forgotten: the right of assembly. While this right lay at the heart of some of the most important social movements in American history—abolitionism, women's suffrage, the labor and civil rights movements—courts now prefer to speak about the freedoms of association and speech. But the right of “expressive association” undermines protections for groups whose purposes are demonstrable not by speech or expression but through ways of being. John D. Inazu demonstrates that the forgetting of assembly and the embrace of association lose sight of important dimensions of our constitutional tradition.


Praise For Liberty's Refuge: The Forgotten Freedom of Assembly…

"Inazu offers the most thorough survey we have of the changing conceptions of freedom of assembly in America."—Andrew Koppelman, author of A Right to Discriminate? How the Case of Boy Scouts of America v. James Dale Warped the Law of Free Association

“The Framers of the Bill of Rights took care to protect not just speech, but speech in association with others, which they called "freedom of assembly."  The Supreme Court, of late, has reduced this important right to a mere appendage to freedom of speech.  This important book explains why an independent right of assembly or association matters to civil liberties, and why it is in danger,”—Michael McConnell, Richard & Frances Mallery Professor and Director of the Constitutional Law Center, Stanford Law School.

“An original, important, and provocative (in a good way) work… Inazu writes beautifully, he has researched exhaustively, and he keeps the reader’s attention through an impressive range of topics and history…The book is a pleasure to read,”—Robert K. Vischer, author of Conscience and the Common Good: Reclaiming the Space Between Person and State

“The First Amendment's guarantee of "the right of the people peaceably to assemble" is the neglected stepchild of modern constitutional law.  John Inazu's Liberty's Refuge breathes new life into the clause. His careful historical and analytical reading of the clause explains it as a core component of the constitutional protections available to all individuals”—Richard Epstein, Design for Liberty:  Private Property, Public Administration, and the Rule of Law
— Richard Epstein

"This is a splendid act of retrieval. John Inazu argues that the courts for years have focused on the invented doctrine of “freedom of association,” a doctrine that is focused narrowly on speech and easily overcome by competing state interests. As a result, a key First Amendment right—the right to peaceably assemble—has disappeared. In arguing for its return, Inazu reminds us of a strong American tradition of assembly: one that recognizes that state is not the only “sovereign” in American life, that groups play a vital role in our social infrastructure, and that their meaning goes far beyond their “message.” His book provides a strong challenge to current law and scholarship, and raises deep questions about the meaning of the First Amendment and the nature of society. Thoughtfully argued, beautifully written, drawing on a wealth of sources, Inazu’s book is a valuable contribution to First Amendment law and theory." —Paul Horwitz, Gorden Rosen Professor, University of Alabama School of Law
— Paul Horwitz

John D. Inazu is associate professor of law at Washington University in St. Louis.
or support indie stores by buying on
(This book is on backorder)