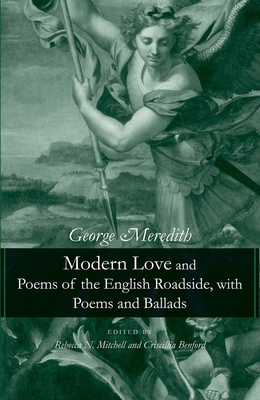 Modern Love and Poems of the English Roadside, with Poems and Ballads

Modern Love and Poems of the English Roadside occupies a distinctive and somewhat notorious place within George Meredith’s already unique body of work. Modern Love is now best known for the emotionally intense sonnet cycle which Meredith’s own contemporaries dismissed as scandalously confessional and indiscreet. While individual sonnets from the work have been anthologized, the complete cycle is rarely included, and the original edition has not been reprinted since its first appearance in 1862. This edition restores the original publication and supplements it with a range of accompanying materials that will reintroduce Meredith’s astonishing collection of poetry to a new generation of readers.


Praise For Modern Love and Poems of the English Roadside, with Poems and Ballads…

“This complex, avant-garde Victorian poet comes into his own in this outstanding edition. Meredith's provocative experiments, prismatic ironies and shifting perspectives dazzle anew here, with the poems published alongside ‘Modern Love,’ plus contemporary reviews, cultural documents of poetics, sexuality and the sensoria.”—Isobel Armstrong, University of London
— Isobel Armstrong

Rebecca N. Mitchell is an associate professor of English at The University of Texas Pan American. Criscillia Benford is a Visiting Scholar in the English Department at Stanford University.