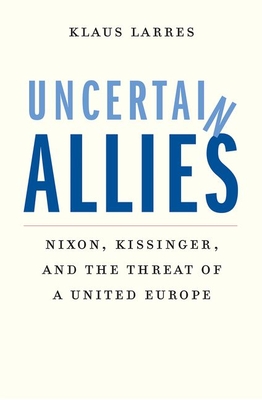 Nixon, Kissinger, and the Threat of a United Europe

The United States has long been conflicted between promoting a united Western Europe in order to strengthen its defense of the West and the fear that a more united Western Europe might not submit to American political and economic leadership. The era of wholehearted support for European unity was limited to the immediate postwar era. The stances of the last three U.S. presidents—Bush’s unilateralism, Obama’s insistence on “leading from behind,” and Trump’s overt hostility toward the European Union—were prefigured by Washington’s economic and geopolitical strategies of the 1960s and 1970s. Concentrating on the policies of Richard Nixon and Henry Kissinger, Klaus Larres argues that their years in office were the major turning point when “benign hegemony” gave way to an attitude toward Europe that was seldom better than lukewarm, and that was returned in kind. This book offers an unusually clear and comprehensive examination of transatlantic relations during the Nixon era.


Praise For Uncertain Allies: Nixon, Kissinger, and the Threat of a United Europe…

"Early post-war America saw European unity as vital. Donald Trump saw it as a threat. So had Nixon and Kissinger. Klaus Larres analyzes the turning point of the 1970s with great authority, based on original documents and interviews, including with Kissinger himself. Uncertain Allies is essential reading for understanding the modern world."—Vernon Bogdanor, author of Britain and Europe in a Troubled World

"Klaus Larres deploys his fine skills as a writer and his foreign policy expertise to make an interesting case on the transatlantic relationship. Uncertain Allies is an engaging and thought-provoking read."—Michael Clauss, German ambassador to the European Union

"Klaus Larres dissects the complexities and paradoxes in alliance politics that are generally concealed by Rose Garden speeches and the rhetoric of NATO summits.  Policy makers and scholars will find much to ponder in this painstakingly researched account of a US giant, idealism put aside, behaving like a normal great power with interests and anxieties all its own."—Bob Carr, former Australian Foreign Minister

Klaus Larres is the Richard M Krasno Distinguished Professor of History & International Affairs at the University of North Carolina, Chapel Hill. Previously, he held the Henry A. Kissinger Chair at the Library of Congress, was a Senior Policy Adviser at the German embassy in Beijing, China, and a Member of the Institute for Advanced Study in Princeton, NJ.
Loading...
or support indie stores by buying on