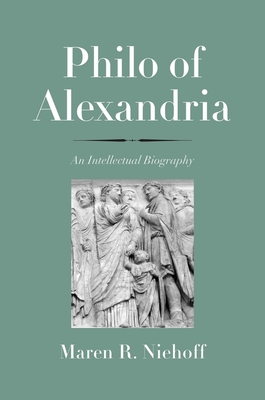 Philo was a Hellenistic Jewish philosopher who left behind one of the richest bodies of work from antiquity, yet his personality and intellectual development have remained a riddle. Maren Niehoff presents the first biography of Philo, arguing that his trip to Rome in 38 CE was a turning point in his life. There he was exposed not only to new political circumstances but also to a new cultural and philosophical environment.

Following the pogrom in Alexandria, Philo became active as the head of the Jewish embassy to Emperor Gaius and as an intellectual in the capital of the empire, responding to the challenges of his time and creatively reconstructing his identity, though always maintaining pride in the Jewish tradition. Philo’s trajectory from Alexandria to Rome and his enthusiastic adoption of new modes of thought made him a key figure in the complex negotiation between East and West.

“It does not happen often that a book is published which has the potential to fundamentally change the paradigm of scholarship on its subject matter, but Niehoff’s intellectual biography...is certainly one of them.”—Eelco Glas, NTT Journal for Theology and the Study of Religion

“A lucid and, indeed, original encompassing reconstruction of Philo’s thinking...Provides a great service to further scholarship”—Angela Standhartinger, Journal for the Study of Judaism

“Only every once in a while (and not that often in one scholarly generation) a book comes along that not only changes fundamentally the perspective on its chosen topic, but, through its novel methodology, will have major repercussions for other fields of scholarship as well. Maren Niehoff’s intellectual biography of Philo of Alexandria is such a work.”—Gretchen Reydams-Schils, Bryn Mawr Classical Review

“A persuasive and illuminating sketch of one of antiquity’s most fascinating figures.”—Jennifer Otto, New England Classical Journal

"One of the best books on Philo to appear for a long time. . . . It is an impressive achievement."—Philip Alexander, International Journal of the Platonic Tradition

"A significant contribution to existing scholarship. . . . Would make a valuable addition to the library of any college, university, or seminary."—David Walter Leinweber, Fides et Historia

Finalist for the 2019 Jordan Schnitzer Book Award, in the category of Jewish Philosophy


“Maren Niehoff’s lucid and original account of Philo’s philosophical biography will speak to students of Judaism, Stoicism, Platonism, and Christianity more widely as a compelling case-study of intellectual exchange in a world united by empire.”—George R. Boys-Stones, Durham University


"Niehoff offers a coherent interpretation of the development of Philo of Alexandria's thought that will be valuable for those interested not only in Diaspora Judaism but also in early Christianity and Greek and Roman philosophy."—Thomas Tobin, Loyola University Chicago


“This is a bold and pioneering attempt to arrange the numerous works of Philo in a chronological sequence and on that basis to write an intellectual biography. All future attempts will be based on this book. In her outstanding accomplishment, Maren Niehoff also restores Philo to his Roman context, which is usually ignored.”—Shaye J. D. Cohen, Harvard University

Maren R. Niehoff, Max Cooper Professor of Jewish Thought at the Hebrew University of Jerusalem, trained in Jerusalem, Berlin, and Oxford and at the Harvard Society of Fellows. She is the author of Jewish Exegesis and Homeric Scholarship in Alexandria, Philo on Jewish Identity and Culture, and The Figure of Joseph in Post-Biblical Jewish Literature. Niehoff received the Polonsky Prize for Creativity and Originality in the Humanistic Disciplines at the Hebrew University in 2011 and is widely regarded as one of the leading Philonists today.
Loading...
or
Not Currently Available for Direct Purchase