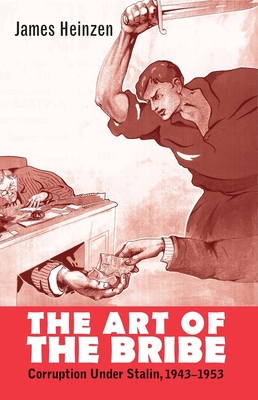 The Art of the Bribe (Hardcover)

In the Soviet Union, bribery was a skill with its own practices and culture. James Heinzen’s innovative and compelling study examines corruption under Stalin’s dictatorship in the wake of World War II, focusing on bribery as an enduring and important presence in many areas of Soviet life. Based on extensive research in recently declassified Soviet archives, The Art of the Bribe offers revealing insights into the Soviet state, its system of law and repression, and everyday life during the years of postwar Stalinism.

James Heinzen is professor of history at Rowan University in New Jersey, where he teaches Russian and European history. The author of Inventing a Soviet Countryside: State Power and the Transformation of Rural Russia, 1917–1929, Heinzen lives in Strafford, PA.

Praise For The Art of the Bribe: Corruption Under Stalin, 1943-1953 (Yale-Hoover Series on Authoritarian Regimes)…

“The book will be of great value not only to social historians but also to all those interested in how the Soviet system of government functioned under Stalin.”—Sheila Fitzpatrick, American Historical Review
“Heinzen’s analysis adds multiple dimensions to our understanding of social and cultural complexity of authoritarian regimes.”—Alena Ledeneva, Journal of Social History

“Heinzen has done impressive research for this project and is scrupulous with his sources.”—Julie Hessler, Journal of Modern History
“A rich depiction of everyday life and the moral universe of the post-war Soviet Union.”—Elena A. Osokina, Slavic Review
“James Heinzen’s exhaustive, impeccably researched, and compelling work examines gifts of gratitude, self-interested giving, and transactional payments, as well as the cultural dimensions or ‘art’ of bribery. . . . I found this material fascinating and original.”—Golfo Alexopoulos, Russian Review
“Corruption could be the most important of all the understudied topics in Soviet history, but James Heinzen has found a way to illuminate this dark terrain with brilliant research. His cogent analysis built upon startling archival finds enlarges the pioneering work of the great Gregory Grossman, and provokes a rethinking of Soviet legal machinery, the state, and the society.”—Stephen Kotkin, author of Stalin
“A magnificently researched, archivally based study of bribery and corruption under high Stalinism in the Soviet Union. The analysis is carefully drawn, fully persuasive, and makes an important contribution to the historiography of the Soviet Union and the comparative study of corruption and bribery.”—Norman M. Naimark, Stanford University
“Stunning …. Bribery was not peripheral or alien to the Stalinist command economy but an essential consequence…. Heinzen's study is bigger than its ostensible subject, for it gives a deeply textured view into how Soviet society actually worked.”—Ronald Grigor Suny, University of Michigan
“In Stalin’s Russia, where the party ruled every aspect of life, to give or take a bribe was to be human. Heinzen’s fascinating study shows how and why it was done.”—Mark Harrison, University of Warwick
"This deeply researched and thoughtful book sheds new light on corruption in the late Stalin years, newly illuminating the limits to Stalin’s power and the Soviet legal system."—Deborah Kaple, Princeton University