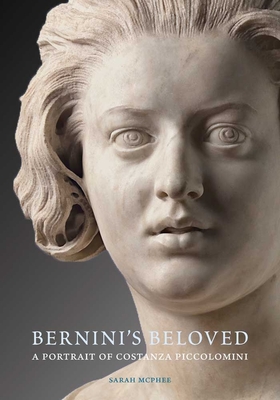 A Portrait of Costanza Piccolomini

With lips slightly parted and eyes fixed on a point in the distance, a breathtaking marble portrait of Costanza Piccolomini appears alive. Carved by Gianlorenzo Bernini in 1636–37 for his own pleasure, the portrait of Costanza is one of his most captivating works, but until now little has been known about its subject.

For centuries Costanza was identified only as Bernini's mistress, who later incited his rage by betraying him for his brother. Author Sarah McPhee corrects and expands this story in her remarkable biography of a sculpture and its subject. Bernini's Beloved sets the bust and Costanza's own life—her childhood and noble name, her marriage, affair, fall from grace, and recovery—against the backdrop of Baroque Rome. Beautifully illustrated and written, this fascinating story expands our understanding of the woman whose intelligence and passion served as inspiration for Bernini's celebrated sculpture, and who courageously forged a life for herself in the decades following its creation.


Praise For Bernini's Beloved: A Portrait of Costanza Piccolomini…

"Splendidly illustrated and erudite. . . . McPhee beautifully interweaves personal history, art history, and the cultural history of baroque Rome to spotlight Piccolomini’s biography and to demonstrate why the power of her image and her story is worth investigating. A highly impressive work of scholarship and a tour de force of interest to art historians, scholars of the baroque with a particular interest in women’s history, [that is also] accessible to general readers."--Publisher's Weekly (starred review)
— Publisher's Weekly

"Enthralling. . . . McPhee's book is rich in historical detail, and truly an original contribution that will be welcomed by scholars, students, and general readers."—Elizabeth Cropper, Center for Advanced Study in the Visual Arts, National Gallery of Art
— Elizabeth Cropper

"A highly original work by an accomplished and enterprising scholar, Bernini's Beloved offers a compelling, untold human story. It shows us the lively 17th-century Roman art world from a novel perspective, that of a woman. . . . It will be welcomed by anyone interested in art, artists, gender, and the social history of Rome during the flourishing of the baroque.."—Elizabeth S. Cohen, York University
— Elizabeth Cohen

"Bernini's Beloved will definitively change the way people look at Bernini's portrait of a woman who turns out to be the descendant of a Pope. . . Sarah McPhee argues that Bernini used his utmost artistry to convey Costanza's divine dignity as a new Venus, reconciling the background of this remarkable statue with its evident value in artistry and materials. The whole picture, for the first time, makes eminent sense."—Ingrid Rowland, University of Notre Dame
— Ingrid Rowland

“McPhee…builds up a detailed portrait of Costanza’s life against the backdrop of Baroque Rome, offering along the way a fresh perspective on Bernini’s life and work.”—Apollo Magazine
— Apollo Magazine

“A scrupulously researched and sober biography of a remarkable woman who was both muse and patron.”—Library Journal
— Library Journal

“Bernini’s Beloved is a most valuable, enlightening addition to our knowledge of the intriguing Costanza and her fascinating Rome.”—Renaissance Quarterly

“McPhee's book is a satisfying detective story, reclaiming the context and evidence of events. Much new information informs this meticulously researched and copiously documented tale.”—Choice
— Choice

‘…a brilliantly researched biography of the woman who was mistress not only of the greatest of all roman sculptors, Gian Lorenzo Bernini, but also his younger brother Luigi. This extraordinary biography recreates the life and passions of Renaissance Rome like no other book I have ever read.’—William Dalrymple, Observer New Review.
— William Dalrymple

Sarah McPhee is professor of art and architectural history at Emory University, and author of Bernini and the Bell Towers: Architecture and Politics at the Vatican (Yale).
Loading...
or
Not Currently Available for Direct Purchase